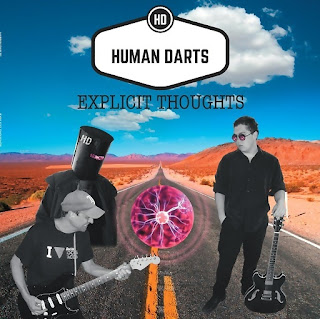 The Human Darts are a kind of moving target. They released an album in the late 1970s as a group of three friends who recorded the album and then simply went their separate ways. Even without a tour, the album went on to become a punk underground hit.

From that point, The Human Darts became a group with shifting members and who sometimes played under different names -- with that classic punk drive as their signature sound. Dart bands in various forms toured the country from the Midwest to California and back. One of the original producers/writers who goes by Mr. Zelk tracked down the son of an original member in Shane Close and original guitarist John Arduser, who he found hitting wiffle balls over his house in St. Pete's, Florida. Adding other simpatico players to fill out the roster, the revamped 2016 version has released the EP Explicit Thoughts.

The songs are lit up by the genuine punk energy that the band has still got after all these years. Stitches has a grungey rockabilly groove with neo absurdist lyrics that are more spoken than sung and some cool sounding guitar work. They do a cover of Hey Good Lookin' where the old country staple gets a punky makeover with growly vocals and a sincere delivery that gives it a post-modern edge. It's nimble guitar work and a jangly barroom piano riff that make this old country staple worth a listen 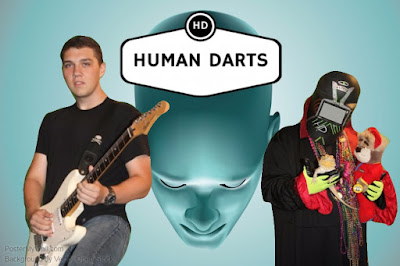 Zombie Man Chant is a highlight of the release. Here, the vocals sound perfect against the cheesy organ and relentless, churning rhythm section, and the energy is perfectly in synch with the delivery. It's a kind of hyperkinetic post-surf rock. Tell My Sister is a song with a retro riff, featuring angry guitars and a nice complexity to the structure. The vocals sometimes have a flat quality; they're at their best in a growly mode or in harmony.

Now that the recording's done, once again the members separated as the record headed to various points around the globe including Japan where the original songs found a lot of fans and were played by local bands.