A BREAKTHROUGH SHOW ABOUT THE ACTIVISTS THAT BROKE THROUGH

UNIVERSES, the award-winning ensemble known for their fusion of theater, poetry, jazz, hip-hop, politics, down home blues and Spanish boleros, makes their Public Theater premiere with an explosive new work about the complicated legacies of the original Black Panther Party and the Young Lords Org/Party. Developed and Directed by Liesl Tommy (Eclipsed, The Urban Retreat). 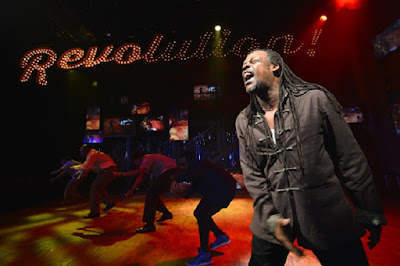 UNIVERSES created PARTY PEOPLE based on dozens of interviews with members of these ground-breaking, society-changing groups. PARTY PEOPLE imagines a present-day reunion at an art opening curated by two young counter culturalists; but the curators themselves have complex relationships with the Party members, who fought injustice and provided free food and medical care for their communities—often at the expense of the people who loved them most. Old wounds and generational divides collide in this astonishing, multi-media theatrical event about the price of being a revolutionary, and what it means for those who come after.

Breaking the bounds of the expected, the members of UNIVERSES (Steven Sapp, Mildred Ruiz-Sapp and William Ruiz aka Ninja) and Liesl Tommy —invite audiences of every age, color and creed to join them as they continue to revolutionize American theater and explore the fight to bring power to the people, and the people to power.

There are two easy ways to purchase tickets: