Agriturismo in Puglia Italy: Explore centuries old food culture from the ground up

Explore centuries old food culture from the ground up
Agriturismo in Puglia, Italy

If the shape of Italy is often compared to a boot, then Puglia, or Apulia, is the heel, a southern region of the European nation. Puglia stretches along hundreds of kilometres of coastline along the Adriatic and Ionian Seas that has been whitewashed by the warm Mediterranean sun. Here, you'll find a local culture with deep, deep roots. There are farms that have been cultivated for centuries, including, naturally vineyards, and olive groves, producing rich local cuisine that varies from town to town. There are enchanting cities full of baroque architecture and beautiful beaches to explore. This is where savvy travelers are finding an authentic taste of Italy without the crowds of Tuscany or Lombardy. 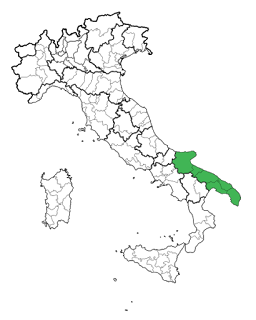 Over the centuries, the area has seen its share of ups and downs, peace and warfare, including getting caught up in Greek and Turkish battles. It was once part of the ancient Arab empire. Puglia is a place of contrasts and a history you can explore in places like the Castel del Monte (literally, Castel of the Mount), built by Holy Roman Emperor Frederick II and dating back to Byzantine and Norman civilization. But the typical historical buildings of this region are actually the Masserie, originally fortified farms, which are now dedicated to tourists.

In a region so renowned for its agricultural history and food culture, a farming holiday is the natural option. Here, you can abandon yourself to the slow pace of the countryside while exploring Puglia’s agricultural museums and didactic manor farms. These are set amidst broad expanses of centuries-old olive groves and vineyards where Designation of Origin products are made, like PDO extra virgin olive oil and delicious DOC (Controlled Designation of Origin) and IGT (Typical Geographical Indication) wines: Negroamaro, Aleatico and Primitivo.
This is the flavor of a countryside vacation, with its slow rhythms set by nature, and its settings beneath the star dome ceilings of ancient masserie (manor farms) and traditional trulli (traditional stone huts) surrounded by lush forests and stretches of farmland.
Bari
Bari is the capital of the region as well as a university town, and it's where you'll find the area's trendiest clubs and shops in the contrada Capitolo. This busy port on the Adriatic Sea has a beautifully preserved Old Town section with narrow, winding streets and artisan workshops, and beautiful old churches.
A drive along the coast from Bari will take you to a string of villages that dot the whitened cliffs. Molfetta, less than 20 km north from Bari, is one of the most important fishing centres in the region. The historic centre, famous for its “fishbone shaped” alleys, is dominated by the Romanesque Duomo of San Corrado, an architectural gem of the old city with two towers, and also by the Torrione Passari, belonging to the ancient city walls, the Church of Sant’Andrea and the Diocesan Museum.
Each small village has its own typical recipes and dishes rich in local fragrances, with menus based on homemade orecchiette, grilled meats and fish-based specialties. But there are also seasonable vegetables, dairy products, cheeses and many baked goods: focaccia, fried pettole and sweet pasticciotti to savour.
Eating your way through Puglia
In Puglia, land of extra virgin olive oil DOP (denomination of protected origin), fine wines of DOC (denomination of controlled origin) and IGT (typical geographic indication), the bounty of the land in agricultural products and seafood and fish from the turquoise seas merge into a delicious traditional cuisine.
In Gargano, among lakes and the sea, an area framed by the wonderful landscape of Lesina, you can taste the famed eels and other extra-fresh fish varieties, which in Peschici and Vieste are served inside the old trabucchi, a wooden fishing "machine" built to jut into the sea on a platform, suspended above the waters. In the province of Foggia, you will find some of the most beautiful hamlets in Italy,such as Rodi, Vico del Gargano and Ischitella: here valuable citrus trees are cultivated and you cannot miss sampling the prosciutto, and the lard of Faeto, along with the caciocavallo podolico, a type of cheese made from the raw milk of the Podoica, a rare breed of cow native to the region.
Further south, in the Imperial Puglia and in the Land of Bari a superb delicatessen experience created by the dairy tradition and renowned bakery products await your eating pleasure. A visit to Castel del Monte, in Andria, is also a chance to taste the burrata, a fresh cheese made of mozzarella and cream, and the queen of Puglia’s dairy products.
The olive groves and vineyards of Bari have resulted in a famed tradition of cuisine. Bari area specialties include tiella (made with rice, potatoes and mussels,) soft focaccia made with fresh tomatoes, and orecchiette, the pasta that is the undisputed queen of Bari’s cuisine. In Alamura and Laterza, you'll savour the centuries old art of breadmaking. In the land of trulli, you’ll be welcomed by the smell of grilled meat. In the Itria Valley, in Martina Franca, Locorotondo and Cisternino: these quiet towns are best discovered at a leisurely pace while strolling through the paved alleys lined with whitewashed houses.
With the superb black mussels of Taranto, and Gallipoli’s fish soup, the sea literally vies with the land for the most authentic flavours and fragrances, finding their highest expression in the reinterpretation of traditional dishes. In Lecce, the "Florence of the South" with its treasure chest of southern Baroque architecture, traditional dishes made of local fava beans and chicory will win over your palate. Here you can order ciciri e tria, an ancient dish with Arab roots and made with pasta and chick peas, and pasticciotto, the traditional custard-filled sweet, which is sometimes called "pusties" in North America.

Puglia is a feast for all the senses, best experienced at the relaxed pace of the countryside.