Straight out of Georgia USA, Michael Van and the Movers come with this full length releast of roots country with a modern sensibility. It's classic, mainstream country music, straight up, performed with a sincerity that is true the music's roots from the tremulous emotion three singers squeeze out of their voices to the sweet vocal harmonies. 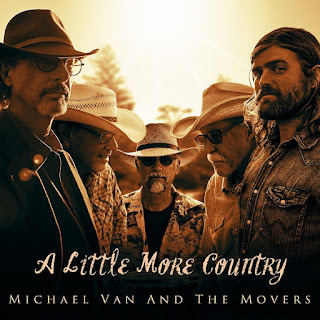 The instrumentation is lush in a rootsy vein, where mandolin works in nicely with a twangy slide guitar and the occasional fiddle line. Vocal variations with different singers, from the rich baritone of a country heartthrob to a raspier tone, add to the appeal of the CD.

Michael Van is the name of the band, but Van spreads the spotlight around pretty equally among an ensemble of talented players and vocalists, and that includes songwriting skills in the Americana/country/roots vein. Even the drum beat stumbles a little (intentionally that is) on Van's Getting Drunk On A Monday, an ode to barroom regulars. Gimme Back My Guitar is an old time country waltz that rolls along underneath lyrics about communicating in a relationship - modern sensibilities combine with a rich roots sound. It's a winning marriage that characterizes the whole CD.

Alan Bond (of Dark Hollow) plays tasteful mandolin leads and adds vocal harmonies, as well as songwriting talents. He sings lead on a few songs, including River Road, where the mournful quality of his voice works nicely with the silvery notes of his mandolin. In Skedaddle Mountain Lullaby, you almost wonder if he didn't come up with the title first and then filled in the blanks with fiddle and twangy guitar leads in a rapid two-step beat.

Pete Ahonen adds his vocals to the mix, along with some of the CD's more colourful lyrics. Love Me Till Thursday is a romantic waltz, an Eagle-esque tune that's lit up by the retro country arrangement - let's call the lyrics romantic realism at its finest. As you'd expect, Juanita is their foray into a Mexican flavoured groove - and a gritty kind of realistic perspective. Juanita, cross the border again...
Michael Van's raspy, expressive voice shines on Don't Mind If I Do in a world weary tone that works so well. It's the highlight of the CD. Sounds Like Rain is the prettiest song - musically that is - with lyrics that tell a hard luck story about poverty and family violence. Perhaps most haunting is the band's cover of Look At Miss Ohio, a Gillian Welch song with lovely chord changes lit up by some imaginative harmony vocals.

If you appreciate polished country music in a roots mode, this is a release to check out. 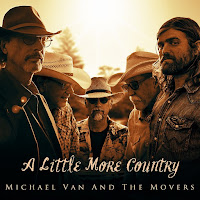