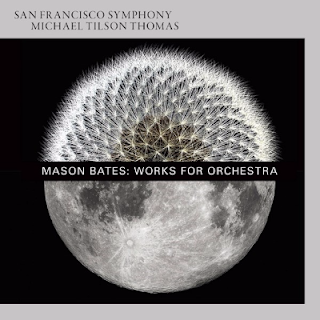 SAN FRANCISCO, December 2016 — Music Director Michael Tilson Thomas and the San Francisco Symphony’s live concert recording of works by Bay Area composer Mason Bates was nominated for a 2017 Grammy® Award today in the category of Best Orchestral Performance. Mason Bates: Works for Orchestra was released in March 2016 and features the first recordings of the SFS-commissioned The B-Sides and Liquid Interface, in addition to Alternative Energy. These three works illustrate Bates’s exuberantly inventive music that expands the symphonic palette with sounds of the digital age: techno, drum ‘n’ bass, field recordings and more, with the composer performing on electronica. MTT and the SFS have championed Bates’s works for over a decade, evolving a partnership built on multi-year commissioning, performing, recording, and touring projects. Click here to watch a video about Mason Bates: Works for Orchestra.

"I never cease to be astonished by the San Francisco Symphony's impact on American music,” stated Mason Bates this morning. “Their performances of living legends, from Lou Harrison to John Adams, have continually thrilled and educated me.  It's an honor to be part of their recorded legacy and receive this Grammy nomination.”

This recording is available as a hybrid SACD, playable in conventional CD players as well as in SACD stereo and SACD surround formats for audiophiles who want a greater range of premiere sound options, and as a studio master quality digital download. This is the 20th Grammy nomination for the San Francisco Symphony; the Orchestra has won 15 Grammy Awards, eight since launching SFS Media in 2001.The 59th annual Grammy Awards will be held at the Staples Center in Los Angeles on Sunday, February 12, 2017, and broadcast in high definition and 5.1 surround sound on the CBS Television Network at 8 p.m. ET/PT.

Since the release of Mason Bates: Works for Orchestra, the San Francisco Symphony has continued to collaborate with Mason Bates. In April 2016 the Orchestra performed the world premiere of his work Auditorium, with Bates performing on electronica. The performance was streamed live on Facebook, marking the first time a major symphony orchestra had utilized Facebook’s live video streaming feature for a world premiere performance and reaching nearly 1 million people from more than 50 countries.

In January 2017, SoundBox — the San Francisco Symphony’s experimental performance venue and late-night live music series — presents two performances co-curated by Mason Bates and Edwin Outwater and exploring music written in response to natural settings. These performances will culminate in the SFS premiere of Bates’s The Rise of Exotic Computing for sinfonietta and laptop.

SFS Media is the San Francisco Symphony’s award-winning in-house label, launched in 2001. SFS Media releases reflect MTT and the SFS’s artistic vision of showcasing music by American composers as well as core classical masterworks and embody the broad range of programming that has been a hallmark of the MTT/SFS partnership. Recorded live in concert and engineered at Davies Symphony Hall, the audio recordings are released on hybrid SACD and in high-resolution digital formats.

All SFS Media recordings are available from the Symphony Store in Davies Symphony Hall and online at sfsymphony.org/store, digitally on itunes.com/sfsymphony, and from all major retailers and other digital outlets worldwide. SFS Media recordings are distributed by harmonia mundi in the U.S., Canada, and France, through Avie Records internationally, and by The Orchard to digital retailers. 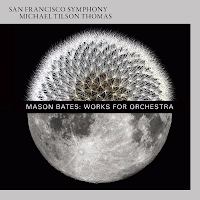