A protean musical force who reveals new sonic realms with each project, Jeff Denson decided to see what it sounds like when his worlds collide. The bassist, composer, professor and bandleader has produced an array of astonishing music since settling in the San Francisco Bay Area. He's explored intricate harmonic soundscapes in Electreo with drummer Alan Hall and bassoon and electronics virtuoso Paul Hanson, and reached his widest audience collaborating with the octogenarian alto legend on 2015's The Jeff Denson Trio + Lee Konitz. His new album Concentric Circles, just released on his Ridgeway label on June 24, combines the talent-laden personnel of Electreo and the Jeff Denson Trio in a startlingly original quartet. 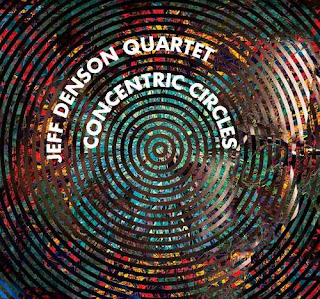 Featuring Electreo's Hanson and Hall and the Jeff Denson Trio's pianist Dan Zemelman, Concentric Circles is a breathtaking acoustic project that focuses on the bassist's finely wrought compositions. While only two tracks feature his vocals, Denson's writing is deeply informed by his connection to the voice, a lyrical sensibility that manifests itself in his breathtaking bow work and gracefully flowing pizzicato lines. While he draws personnel from two ongoing ensembles, Denson sees Concentric Circles as encompassing yet another distinct creative domain by building on the intricately constructed chamber jazz of Secret World, his 2012 album featuring trumpeter Ralph Alessi, drummer Dan Weiss and pianist Florian Weber (his partner in the acclaimed collective trio Minsarah).

"I started with the concept of bringing these two groups together, so that's one set of circles," Denson says. "And I'm writing music dealing with interlocking melodies, wheels within wheels, themes exploring constant change and the world we live in. It's really a follow up to Secret World, a setting in which I'm really free to write and compose. The pieces aren't lead sheet style compositions. The forms are pretty complicated, with a lot of through-composed parts, written out second lines and improvised sections that touch on my circles of influence-jazz, free improv, chamber music, and the centrality of the voice."

Marked by rapid movement and vivid incident, the album opens with "City Life," a tune built on an unusual subdivision of seven inspired by the relentless momentum of New York subways. Like a Mondrian grid, the piece turns an abstract representation into the pulsing embodiment of urban experience. Driven by Zemelman's hurtling left hand, "Anticipation" exemplifies Denson's gift for crafting extended melodic lines. Navigating the long form and the unexpected harmonic progression with seeming ease, these consummate musicians make his highly challenging piece sound like an oft-played jazz standard.

One of the many pleasures provided by Concentric Circles is the way in which Denson and Hanson blend their sumptuous sounds. On "A Thought That Lingers" it's often impossible to distinguish between the double reed and the arco bass as the episodic, multi-meter tune moves from the lush opening harmonies to the jagged, almost atonal middle section and the concluding return to comforting tonality. Like Electreo, Denson sees the ensemble as a forum for exploring Hanson's unprecedented mastery. "Almost immediately after meeting him I put Electreo together and we started doing gigs in different settings," he says. "In addition to being a hyper virtuoso, Paul is arguably the top improvising bassoonist in the world."

Denson's formative source of inspiration, the voice, moves to the foreground on "Wishing Well," a gently imploring chamber jazz setting that serves as an open letter to a close friend. He puts his voice to very different use on "Once the Door Opens," a ravishing piece in which Denson's lithe bass moves in a different meter than his wordless vocal line. A spiritually charged journey, the song builds to an exquisite intertwined harmonic dance between bass, vocals, and bassoon. While conceived with lyrics, "Time Waits for No One" turned into an instrumental number with Denson bowing the melancholy, almost brooding melody.

The album closes with Duke Ellington's classic lament "I've Got It Bad." It's a brief solo bass tour de force, rendered entirely with ringing harmonics, an exercise that flows from Denson's continual quest to bring the bass into new territory. "I wanted to see what I could do to make it sound like a chordal instrument," he says. "You can make the bass sound like a flute or angels singing, so you wouldn't even know it's this gigantic wooden box."

Make no mistake, Denson writes difficult music. The marvelous coherence and captivating interplay on Concentric Circles is a testament to these musicians' capacious skills. Zemelman is "a very creative and very musical player who's really interested in straight ahead jazz," Denson says. "But he's also very open, and a great reader. He's a great melodic improviser, who can bridge these different sounds I'm interested in with his classical background. And Alan is awesome, a super creative person. He's a fantastic visual artist who does mixed-media work with photography and found objects. And of course he's a virtuoso drummer, with amazing rhythmic control, and an incredible amount of power and energy he can bring to a group." 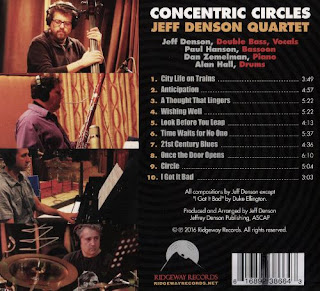 Preparing to move to New York City upon graduating Magna Cum Laude in 2005 from the MM in Jazz Studies at the Florida State Univeristy, Jeff ran into bass giant Mark Dresser, who had just been hired as a professor at UC San Diego. With Dresser's encouragement and a full scholarship, Denson relocated to Southern California and earned his doctorate in contemporary music performance with an emphasis on composition. Throughout his San Diego sojourn, Denson continued to tour widely with Minsarah, and it was during a spate of 2006 concerts in Germany that Lee Konitz first heard the band, "the start of a great adventure," Denson says. "The stuff we do is very different than any music in his canon. Lee is a true improviser. He doesn't play licks. He really responds."

With Minsarah serving as his band, the critically hailed Lee Konitz New Quartet debuted on 2007's Deep Lee and followed up with 2009's Live at the Village Vanguard, which earned the 2010 Album of the Year Award from France's Jazzman Magazine, and 2014's Standards Live: At the Village Vanguard (all on Enja). Denson went on to demonstrate his vast versatility with simultaneous duo releases, interpreting American hymns and spirituals with powerhouse San Diego pianist Joshua White on I'll Fly Away and recording an album of free improvisation with Swiss clarinet virtuoso Claudio Puntin on Two. Since relocating to the East Bay in 2011 to take on a full professorship at the California Jazz Conservatory, Denson has forged ties with some of the Bay Area's top players, including clarinetist Ben Goldberg and guitarist Mimi Fox. A prolific composer and arranger, he's written music for an array of jazz settings, from big band to trio, as well as for string ensembles, solo bass, and a chamber opera.

He's brought his many pursuits under one umbrella with the recent unveiling of Ridgeway Arts, a non-profit designed to enhance and fortify the Bay Area scene, and to make a strong contribution to the national landscape of jazz and the arts in general, through a four-pronged plan of expression, education, presenting and documentation.  He introduced the initiative with The Jeff Denson Trio + Lee Konitz, and followed up with Arctic by Alan Hall's critically hailed electric ensemble Ratatet. With Concentric Circles, Denson continues to expand Ridgeway's possibilities, building bridges between artists, students, and audiences "to get the music to people," he says. "It's a vehicle for music that gets lost amidst the dross of mass culture."