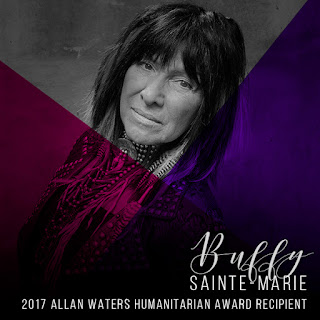 Toronto, ON — The Canadian Academy of Recording Arts and Sciences (CARAS) today announced that iconic singer-songwriter, multi-instrumentalist, social activist, educator, philanthropist and visual artist Buffy Sainte-Marie will be the award recipient of the 2017 Allan Waters Humanitarian Award, presented by Bell Media. Sainte-Marie exemplifies the essence of humanitarianism through her dedication to protecting indigenous communities and indigenous intellectual property, which have been at the epicentre of her lifelong activism.

Given out annually at the JUNO Awards, the Allan Waters Humanitarian Award celebrates and recognizes the philanthropic efforts made by Canadian musicians that have created a positive impact on the social welfare of society as whole. Named after CHUM Ltd. founder Allan Waters, the award is made possible by funding from BCE-Bell Media Benefits. This year’s award will be presented at the JUNO Gala Dinner & Awards presented by SOCAN on Saturday, April 1, 2017 at the Shaw Centre in Ottawa, Ontario.

“I've had some great partners in mobilizing my ideas in art, education and technology, especially the W.K. Kellogg Foundation who taught me that there's a difference between an administrator and a visionary. Both are important but visionaries are seldom pushy in that business way that administrators learn; and visionaries don't think in corporate pecking order terms so often get squashed out in normal business systems,” said Sainte-Marie. “I've been lucky enough to work in both worlds, and although my timing has sometimes been off and gotten my big mouth into trouble, other times, with the help of other people, I've been effective beyond my expectations. So I thank all my colleagues in and out of the music business for helping put my songs to work.” 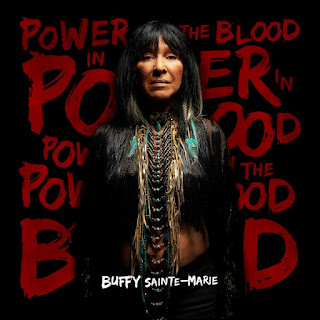 “It’s our privilege to present the legendary Buffy Sainte-Marie with the 2017 Allan Waters Humanitarian Award,” said Randy Lennox, President, Broadcasting and Content, Bell Media. “Her dedication to improving the lives of Indigenous people is truly humbling. We look forward to celebrating this iconic artist and her inspiring philanthropic work at this year’s JUNO Awards.”

Sainte-Marie was born on the Piapot Plains Cree First Nation Reserve in the Qu'Appelle Valley in Saskatchewan and grew up in Massachusetts. With a musical career spanning more than 50 years, releasing her first single in her early twenties, Sainte-Marie is celebrated for her thought provoking lyrics and her passion for supporting Aboriginal people. In 1969, Sainte-Marie founded The Nihewan Foundation for Native American Education, a private non-profit foundation dedicated improving the education of and about Native American people and cultures. An important social activist figure in the 60s, Sainte-Marie became well-known for her 1964 anti-war peace anthem “Universal Soldier,” inducted into the Canadian Songwriters Hall of Fame in 2005. Her hit song “Starwalker” from the album Sweet America (1976, ABC), which she dedicated to the American Indian Movement, also marked the first time Aboriginal and pop music were combined, and with Sainte-Marie dubbing it ‘powwow rock’ she created a new genre.

The first First Nations artist who has been awarded an Academy Award (Best Original Song for “Up Where We Belong,”) Sainte-Marie is also the recipient of four JUNO Awards, a Golden Globe, the Governor General's Performing Arts Awards, a BAFTA Award, multiple Queen’s Jubilee Medals and Canadian Aboriginal Music Awards. She carries the Order of Canada and has been inducted into the Canadian Music Hall of Fame, the Canadian Country Music Hall of Fame and Canada’s Walk of Fame.

Sainte-Marie has toured the world and her performances have been recognized as must see events with Billboard Magazine highlighting her “as an exciting contemporary artist of major dimension.” Her songs have been covered by hundreds of artists including Barbra Streisand, Neil Diamond, Elvis Presley, Glen Campbell, Céline Dion, Cher and Indigo Girls. The multi-talented artist has also had frequent TV appearances throughout her career, including a regular spot on the hit television series Sesame Street (1975 to 1980), creating a positive representation of Native Americans among children.

JUNO Week 2017 will be hosted in Ottawa from March 27 through April 2, 2017. A live broadcast of The 46th Annual JUNO Awards will air on CTV and CTV GO on Sunday, April 2, 2017 from the Canadian Tire Centre in Ottawa.