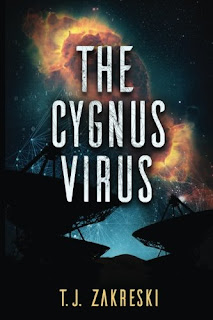 Enjoyably multi-faceted, The Cygnus Virus offers the classic sci-fi cornucopia of adventure, social commentary, and universal themes, wrapped up in a fragmented, postmodern narrative style that shifts perspective and skips through time.

Andron goes to bed half-drunk. When he wakes up, he finds he's crashed the entire internet on his home planet of Terra, and worse still, he's let Cygnus into his world...

Cygnus, as it turns out, is a being from Earth, a planet that has long since succumbed to fuckedization, the inevitable environmental degradation that comes from a species like humans. Or Terrans. Like other Earthlings, Cygnus exists as digital code that can be transferred into other humans. Or Terrans. And so the trouble begins. 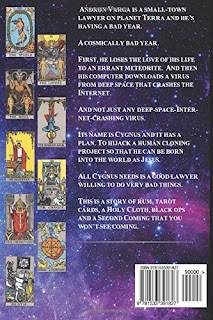 That's just the tip of the iceberg when it comes to the many twists and turns of this novel by Canadian writer T.J. Zakreski. It's a thoroughly satisfying read, sprinkled with literary references, tidbits of both hard science and science fiction created for the story, and dry wit, with a real emotional heart at the middle of it that makes it more than just a clever take on the villain-as-computer-virus trope, although it definitely is that as well. Like all good science fiction, it talks about the Big Questions -- life, death, love.

My only real quibble: Why. Is everyone writing. In sentence fragments.These days. I hate it, and it happens often enough here to prove occasionally annoying.

It's the first in a planned trilogy, with the next volume, Lysandra and the Spear of Destiny, set to be released later this year. But, The Cygnus Virus can be read on its own without compromising the story.
book review canadian writer science fiction