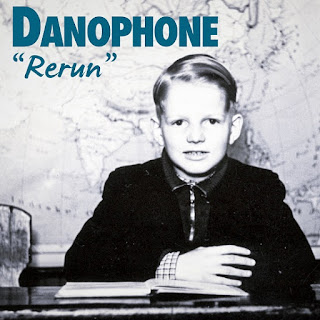 Danophone is the musical side project of Danish science journalist Carsten Nielsen. Rerun is his debut release.


The whole album has a slightly melancholic bent that is somewhat ironic, given that a Danophone (“Danish speaking by birth or adoption”) means you’re living in the “world’s happiest country” according to the United Nations. The city of Aalborg in northern Denmark, where he lives was recently named the Happiest City in Europe.

Frightened For is an an acoustic pop sound with a swingy groove and energy, wrapping a cautionary tale in a catchy tune with a nice hook in the refrain - It's you I'm frightened for.

A lush, layered instrumentation with strings/keyboards and a busy finger picking acoustic style bolsters vocals that are somewhat limited in range and expression on Meet In The Middle. It's a formula that works well.

On Copenhagen Club, the mood turns to straight up rock'n roll in a stripped down, melodic vein. It's an energy he harnesses equally well on City Of The Kings, a rollicking country rock tune.

Some of the songs sound like something you might've heard on Top 40 AM radio in the 1970s, like Arrested or Written In The Sand, with ear grabbing hooks and an organic groove. Tracks like Turn Blue and The Whole Truth venture into pure roots country territory. Nation Of Two is a plaintive country-rock ballad with lyrics that reminisce about love.
Rerun, the title track, is a stand out, with soaring harmonies over a jumpy and insistent rhythm and a contrapuntal guitar line. The nicely layered effect works well.

I'm not sure what's going on with Danish journalism, but one of the back up musicians is fellow journalist Tino Pedersen. Their friendship goes back to their teenage years in high school and the two of them have performed side by side in other bands and duos as “Capones” and “Syndikatet”. Other contributions include drumming from award-winning jazz and rock talent Bertil Bille and mixing & mastering assistance from DJ Elias Bille.

In any genre, it's high calibre musicianship and a nice sense of the songwriting hook that propels this collection of modern pop.