In this evening of deep cuts from the Moroccan gnawa repertoire, Innov Gnawa honors the strength of Moroccan national identity to transcend religious distinctions with a rare performance of the Jewish songbook of this ancient Moroccan musical tradition.

In addition to being the name of this trance-inducing musical style, the term "gnawa" also refers to the people originally from kingdoms spanning Mali to Ghana who were enslaved by the Moorish rulers and brought North to present-day Morocco. The Jewish presence in Morocco dates back to over 2,500 years ago and upon interaction with the gnawa community, a bond formed over appreciation for gnawa music and its healing powers.

Gnawa music pre-dates Islam and originally centered around animistic, spiritual, mystical concepts sung in sub-Saharan languages such as Bambara, Fulani, and Sudani. Upon embracing Islam, gnawa songs began to incorporate Arabic language and themes around the Muslim prophets. "Sebitiyin," meaning The Saturdays in Moroccan Arabic, is the collection of songs that grew out of the gatherings hosted by the Jewish community for the revered gnawa maalems whom they deeply respected. Themes of these songs still include the original elements of spirits and the natural world, and later came to incorporate shared saints from their Abrahamic traditions. Today, it is still rare to find a maalem that knows this full repertoire so we are especially lucky to have Maalem (Master) Hassan Ben Jaafer, son of the late Abdallah Ben Jaafer, lead us through a powerful moment of unity in music.
Innov Gnawa is a young musical collective dedicated to exploring Morocco's venerable gnawa music tradition in the heart of New York City. Formed in the summer of 2014 by Moroccan expat Samir LanGus, the group draws on the considerable talents and expertise of Hassan Ben Jaafer, a Maâlem, or master gnawa musician, originally from Fes, Morocco. Under the guidance of Ben Jaafer, Innov has delved deep into the roots and rituals of gnawa music, and made a big splash in New York City, playing some of the city's most prestigious rooms including Lincoln Center, Music Hall of Williamsburg, Brooklyn Bowl and the storied backroom of Brooklyn's Barbès.

For the uninitiated, gnawa music is the ritual trance music of Morocco's black communities, originally descended from slaves and soldiers once brought to Morocco from Northern Mali and Mauritania. Often called "The Moroccan Blues," gnawa music has a raw, hypnotic power that's fascinated outsiders as diverse as writer/composer Paul Bowles, jazz giant Randy Weston and rock god Jimi Hendrix. The music is utterly singular, played on an array of unique instruments -- from the lute-like sintir that the Maâlem uses to call the tune, to the metal qarqaba (castinets) with which the kouyos (chorus) keep time and pound out clattering, hypnotic rhythms. 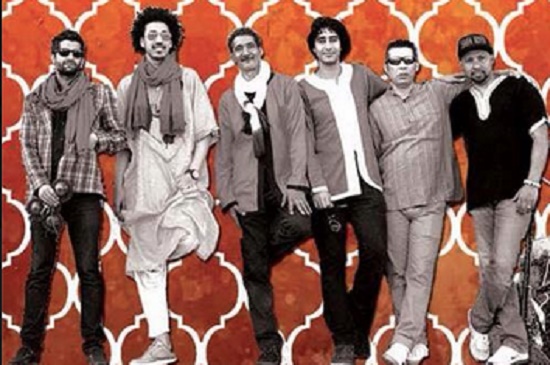 Hailed by Brooklyn Magazine as one of the "5 Bands You Need to Know in Brooklyn's Arabic Music Scene," Innov Gnawa make great use of this traditional repertoire, and add their own, contemporary spin with additional African and Latin percussion. Taken as a whole, this exciting new outfit works hard to fuse a centuries old North African tradition with the pulse and attitude of New York City.