Bones in the Attic, Flowers in the Basesment is the first release for Sacramento, CA based quartet, American High. The band is cagey about names and bios, but not about the message of their music. 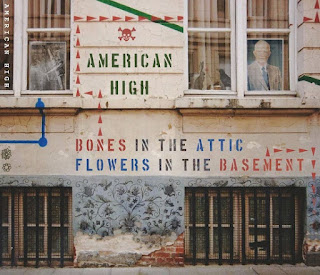 "This is an anti-war record.  Songs like SEPTEMBER and I CAN'T CHANGE are our attempts to put a human face on the costs of trying to force the world to do what we want them to do.  We think everyone should concentrate on minding our own business rather than point guns at each other and demand obedience."

Take retro pop, add a dash of acoustic/electric punk, Cali surf songs, melodic sixties pop, and even shades of classic Americana here and there, shake it up, and you'll get an idea of their sound.

"We think songs are more interesting when they can be seen in different ways.  We shun the tired INTRO-CHORUS-INTRO-CHORUS-LEAD-CHORUS-EXIT blueprint."

It's a sense of invention and urgency that drives the songs. The lyrics are clever without becoming overwrought, and like the music, they draw from a range of influences. From Fairfield, CA,

Take a bus ride, suicide
Chance a ticket to go
And if I never get there
It just means I was never meant to go... 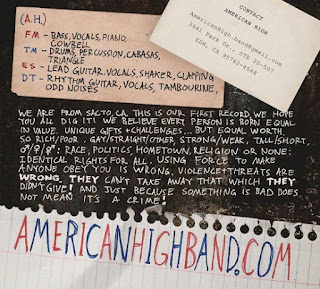 Moon is a stand out track with a relentless, hypnotic groove that ends abruptly, surprisingly. That's part of their musical bag of tricks. Test Pilot is another great track that mixes driving pop rock with interesting rhythmic changes and an almost contrapuntal approach in parts.

Band members go only by their initials - D.T.(rhythm guitar), E.S.(lead guitar), F.M. (Bass), T.M. (drums) - so I can't say who's singing lead or harmony, but there's a nice sense of expression and great harmonies to go around.

Along with social commentary, the songs delve into the usual romantic vein that's given an edge by their inventive sense of musicality. Forgive+Forget You has an interesting sound, part retro pop, part country/Americana, with a distinctly modern sensibility.

This is a cut well above the usual alt-rock crowd, and it will be interesting to hear from this crew in the years to come.