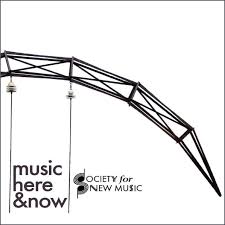 The two-disc set commissioned by the Society For New Music offers a variety of moods and approaches to new music composition through the work of several composers. Rob Deemer's Cantos is full of drama, propelled by a kinetic sense of rhythm that whirls around, building momentum. It's a striking piece that carries you through to a cathartic end. Jacaras, a piece for piano, violin, and cello by Ricardo Zohn-Muldoon, changes the mood to a more emotional, distraught sensibility.

A melancholy oboe/clarinet opens Jorge Villevicencio Grossmann's Whistling Vessels, an intriguing journey in sound with several sections. Libations, a composition by 'Doctuh' Mike Woods, takes a driving jazz bass line and adds an avant garde sense of harmonics. The result sparkles with a fresh sense of both genres.

Music Here & Now brings the new music field - often accused of and viewed as obtuse and elitist - into the purview of the more adventurous listener, of which there are more and more. The focus is on the emotional heart of the music with results that should please those reluctant to endorse new music along with its longtime fans.

Urban hubs like Brooklyn, Chicago and San Francisco have long been seen as incubators of creative cross-pollination, but since 1971, the Society for New Music has been making the case that cultural and artistic collision and germination can happen away from the city lights. With the release of Music Here & Now -- their fourth album on innova Recordings -- once again shows that new music is alive and well in the heart of New York state. 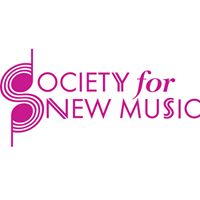 Based in Syracuse and comprising composers and creatives from New York, the Midwest, Peru, China, Mexico and beyond, the Society for New Music is the oldest new music organization in the state outside of Manhattan and commissions at least one new work each season from a regional composer. Music Here & Now pulls together works from Rob Deemer, Ricardo Zohn-Muldoon, Gregory Wanamaker, Zhou Tian, Jorge Villavicencio Grossmann, “Doctuh” Mike Woods and Mark Olivieri. Encompassing a wide range of styles and influences from Mexican to Peruvian folk music to jazz to classical to the natural world to social and political concerns, the music here stakes a claim to an aural world informed by but not bound to geography or genre.

The award-winning Society for New Music is comprised of a core of dedicated professionals who live in the heart of New York State, but who are nationally and internationally renowned. Most have performed and recorded together for 15 to 20 years or more. They all bring their passion for new music to the enterprise.

Society for New Music’s mission is to commission, premiere and record new works by regional composers; advocate for new music via Fresh Ink on WCNY-FM and its affiliates; provide regional musicians an opportunity to perform the music of their peers; encourage young composers (Israel Prize, Rising Stars, Young Composers Corner and workshops); and bring new music to as broad an audience as possible, plus composers-in-residence in the public schools.

Composers:
Illinois native Rob Deemer was educated at the Univ. of Texas-Austin, Northern Illinois, and USC. SUNY Fredonia wisely lured him to Upstate NY. His experience in film music was useful in this collaboration with videographer Courtney Rile for Cantosin 3 movements - Hammer, String, Wind. They captured aurally the sounds of nature matching the visual beauty of Upstate NY.

Born in Mexico, Ricardo Zohn-Muldoon earned his doctorate at the U. of Pennsylvania. Now a Professor at Eastman School of Music, he was a Pulitzer finalist in 2011. “Jácaras” were popular ballads interspersed between the acts of a play to entertain the audience. Each variation in Ricardo’s Jácaras evokes a type of folk music from México.

Gregory Wanamaker, a native of Skaneateles, NY, earned degrees at Shenandoah Univ. & FL State before returning to teach at the Crane School-SUNY-Potsdam. SNM paired Greg with Carrie Mae Weems to collaborate on a music/video they titled A Story within a Story, reflecting on the persistent struggle for civil rights in the U.S. on the basis of gender, race and religion. Carrie Mae went on to win a MacArthur Genius award. 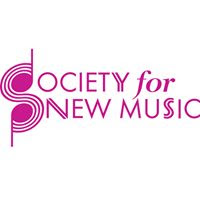 Born in China, Zhou Tian was educated at Curtis, Juilliard and USC. He came to ‘the heart of NY’ to teach at Colgate University. His Morning after the Deluge was inspired by a landscape painting by William Turner (1843). The shifting landscape dissolving into layers of mist against a rising sun inspired Mr. Zhou to design the same for the music.

Jorge Villavicencio Grossmann hails from Peru via Brazil. After earning his DMA at Boston University he settled in Upstate NY to teach at Ithaca College. Whistling Vessels  makes use of his Peruvian heritage by incorporating indigenous ancient Incan whistling (singing) vessels with contemporary chamber ensemble.

Ohio native ‘Doctuh’ Mike Woods studied at Indiana & the Univ. of Oklahoma,the first African-American to receive a doctorate in composition from Oklahoma University. Hamilton College made it worth his while to settle in the ‘heart of NY’. Libations is written as if it were a drink used in a ceremony, but the wine and/or the inebriation is the effect of the jazz solos.

Born in Upstate NY, Mark Olivieri is also a pianist, as equally versed in vernacular idioms as he is in jazz and classical music. While earning his doctorate at Buffalo, he served on the Brockport faculty, then Hobart-William Smith Colleges snapped him up. Commissioned for SNM’s annual Vision of Sound  new music with dance program, Stress Test seamlessly weaves these styles together.