Further is the second release from San Francisco psych rock collective Revolushn. Synthy melodies, rock guitar grooves, and visceral rhythms co-exist in the work of Revolushn. There's even a bit of a prog rock vibe in the virtuosic drumming work and nifty guitar lines. It's modern rock that takes threads from existing genres to weave them into an inventive, shimmery fabric. 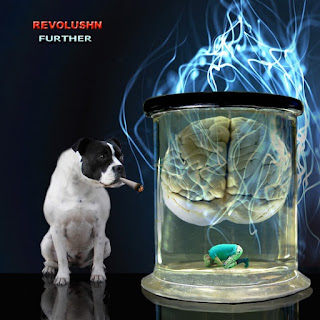 The founders of the group go by NO, on guitar, keyboard, and vocals, and Dekay (or just David Kendrick,) on drums (Devo, Sparks). Dekay also writes most of the lyrics for the band. They're rounded out by Guinevere Q on bass and vocals, Young Sun on guitar, vocals, and mandolin, and Schubert Ola on keyboards and vocals. The result is a satisfyingly full sound with a range of moods at their disposal.

The music is tight, infectious and danceable. Dinosaurs opens the album with an eighties glam rock song wrapped inside driving classic-flavoured guitar rock, with a little psychadelica thrown in for good measure. It's the kind of music with guitar solos that stick in your head, along with those weird flashes of electronica just to break the mood. It was the first single off the album, and recently made the Hot 100 Next Big Thing list on Spotify.

Dog Gets High is the latest video, another driving rocker.

Vocal duties are trippy and atmospheric, with inventive harmonies that layer on top of the groove in tracks like You Will Go. The song moves at a more languid pace in a seventies throwback mode.

All Is As It Should Be gets its momentum from an inventive drum line, and the titular refrain that hovers over the drums, bass'n'guitar machine that churns away underneath. The effect is slightly off kilter, putting the lie to the title. The title track, Further!!, has a jazzy feel with an avant garde sensibility.

Revolushn began it evolution as a studio band that played songs written by No and Dekay. The group recorded enough songs to put out the album The Freshman a few years ago, and get some notice on the airwaves.

The songs were written by NO and David Kendrick. The pair met up with producer Aaron Connor (Bone Thugs-N-Harmony, Belinda Carlyle, Ed Sheeran) at the Grammys and played him some of their tracks. He listened and pulled out his faves.

Based in San Francsico, the band plays shows though out California and is gearing up for a national tour to support the album in the fall. You don't have to be a fan of any particular style or era of rock to enjoy this imaginative release.