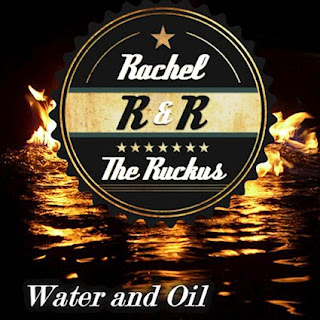 Rachel And The Ruckus deliver straight up high energy rock and roll with a country music edge in their latest single, Water and Oil. As you'd suspect from the title, the lyrics cover the usual 'we're not good for each other, so I've moved on' territory with a polished flair.

"I moved from California to be with my husband who is from here." say Rachel Alena in a media release. "It's basically about leaving my home and chasing a dream. What's more rock and roll than that?"

Rachel has a strong voice, full-bodied, with a nice range that goes from a low country twang to sweet and high. The vocal line is expressive and she's got a variety of tricks in her toolbag to impress. She's an accomplished keyboard player in addition to her vocal abilities.

Singer/keyboardist Rachel Alena and guitarist Alec Sims formed the core of the band, meeting several years ago while both played in another band. Drummer Chris Stongle is the latest addition to the line-up, having recently played at the Rocky Mountain Way concert with Joe Walsh, Garth Brooks, John Oats, Vince Gill, and Amy Grant. The addition of a sax to the mix is a welcome diversion from the usual country/rock instrumentation, giving the rock sound a bit of soul.

It's a crowd pleaser of a track and one that will go down well with fans of the genre.