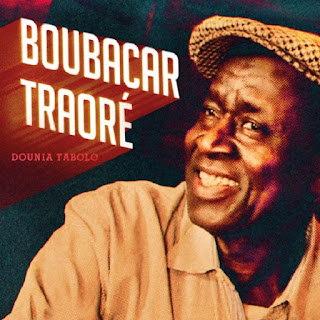 Boubacar Traoré is the last Malian bluesman of his generation. Since the death of Ali Farka Touré, he has been the musical genre’s only West African icon. In the course of an unsettled life, he became the first star of independence at the start of the 1960s and then vanished from the music scene for nearly 20 years before returning to the limelight in the mid-80s. And ‘Karkar’ is still with us today.

Guitarist, singer and songwriter Boubacar Traoré has an inimitable, wholly personal style. Self-taught and inspired by the Kassonké tradition – he was born in Kayes in Northwest Mali in 1942 – like all the young people of his generation, he discovered blues, rock, jazz, soul and Cuban and Congolese music on the radio, and constructed a musical world like no other for himself. Poetic, fluid and stripped down, his guitar work underpins melancholic melodies inspired by everyday life, the joys and sorrows of love, and passing time. The years have been good to the timbre of his warm, deep voice, which is packed with emotion. Although he has often been compared to Skip James, Robert Johnson and the Mississippi Delta bluesmen in general, he finds inspiration on the banks of the Niger in Bamako, where he now lives.

After an erratic career with long periods of absence, it was at around seventy that the guitarist returned to the public eye in the company of Vincent Bucher, one of the finest contemporary harmonica players and Boubacar’s alter ego. More African-American than French, Vincent brought a new freedom and international culture to Boubacar’s music, as demonstrated by two records – Mali Denhou (2011) and Mbalimaou (2015) – and many concerts given all around the world to audiences who are constantly galvanized by the chemistry of the duo, accompanied by Alassane Samaké’s wonderfully subtle calabash.
On his new album, Boubacar decided to continue with this internationalization, bringing in musicians from the Southern States of the USA he had met on tour: Cedric Watson on violin and washboard, and Corey Harris on guitar. When he told them he wanted to add a cello and female voice to the album, Cedric Watson suggested Leyla McCalla. Boubacar’s intention was to change the coloration of his songs (standards and new numbers) while conserving their original character. From blues to folk and Creole, Cajun or zydeco music, his new traveling companions have provided a touch of folly and swing (Cedric Watson), blues depth (Corey Harris) and discreet elegance (Leyla McCalla). More than ever, Boubacar Traoré has shown himself to be the living, vital connection between Mali and the Mississippi.