CALPURNIA
A classic novel turned on its head. A dinner party gone wrong.

(Toronto) Nightwood Theatre is thrilled to partner with Sulong Theatre in the World Premiere of Audrey Dwyer’s Calpurnia, onstage at Buddies in Bad Times Theatre from January 14 – February 4, 2018.
A hilarious and provocative look at class, race, and appropriation, Calpurnia invites us into an outrageous and unexpected evening at the home of a wealthy Jamaican-Canadian family. As Justice Lawrence Gordon (Andrew Moodie) prepares for an important dinner to introduce his son Mark (Matthew G. Brown) to a Senior Partner at a prominent law firm (Don Allison), his daughter Julie (Meghan Swaby) grapples with her new screenplay. Seeking to redress To Kill a Mockingbird through the perspective of Calpurnia – the Finch family maid – Julie, privileged and disconnected from domestic work, turns to her long-term Filipina caregiver Precy (Carolyn Fe) for research on servitude. But as Julie examines mammy culture from the inside out, her tactics are met with explosive results.


“As a Black woman who creates theatre, I wanted to create characters who make mistakes while growing into their politics,” says Dwyer. “Julie charges through her values, making mistakes and coming out on the other side to take a hard look at herself. Through her, I wanted to show the difference between intention and impact.” Having grown up with a mother and aunts who were caregivers, Dwyer also interviewed domestic workers throughout her research, mindful of the need to keep her own privilege in check while bringing the character of Precy to life.

A rich and layered piece of theatre, Calpurnia seeks to challenge the lasting impact of a problematic so-called “classic” novel still taught in schools and playing on our stages today. The themes of race and allyship reflected in the response to Harper Lee’s To Kill A Mockingbird are further explored in Julie’s relationship to her best friend Christine (Natasha Greenblatt), a white woman who also happens to be dating Julie’s brother Mark.
Award-winning playwright Audrey Dwyer takes on all these themes with deft charm and cringe-worthy dark humour. Having earned a 2016 Dora Mavor Moore Award for Outstanding New Play for Young People’s Theatre’s wordless play One Thing Leads to Another,Dwyer is eager to unleash this brave new satirical piece that will speak volumes.

“There is no better way to end Sulong Theatre Company’s decade-long journey than to co-produce Calpurnia alongside Nightwood Theatre,” says Catherine Hernandez, Artistic Director of Sulong Theatre. “Audrey's work is a much-needed difficult conversation around race and class in action and onstage."

Nightwood is honoured to bring this piece to the stage after having worked alongside Audrey Dwyer for over ten years, and since first presenting a reading of Calpurnia as part of the 2014 Groundswell Festival. “In Calpurnia, Dwyer balances on a razor's edge between horrifying discomfort and outright hilarity,” says Kelly Thornton, Artistic Director of Nightwood Theatre. “She speaks about hard issues, while making the audience laugh the entire time.” 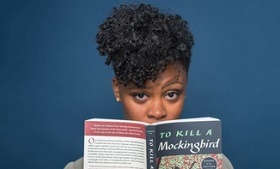