• Check out a winter getaway in Prince Edward County 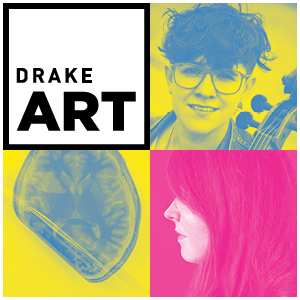 WELLINGTON, CANADA - Nine Canadian artists are setting up shop at the Devonshire this winter. Join our roster of choreographers, musicians + visual artists as they get inspired by the beauty of Prince Edward County.

The Drake’s artist-in-residence program has been a key part of the hotel’s cultural identity since we opened in 2004. The program was developed to give visitors access to artists from all over, in a setting that’s less intimidating than a traditional museum.

Jan 21-24 - Charlie Bierk
Charles Bierk is a portrait painter based out of Toronto. His large-scale black and white paintings easily bring to mind early works by acclaimed portrait artist Chuck Close. Bierk (who graduated from OCAD in 2011) photographs close friends, family, and peers before rendering their likeness in hyper-realistic oil paintings.

Jan 28-31 - Michael Vickers
Michael Vickers works in the space between sculpture, painting and installation. His recent work investigates the limits of different materials and presentation methods - painted, curled and bent forms made of various painted aluminums and steels, etched and engraved stone and marble works, and installations that activate the exhibition space in various ways. Vickers holds an MA in Art History from the University of Toronto and an Honours BA in Visual Arts & Communications.
Feb 4-7 - Alicia Nauta
Alicia Nauta's practice spans many forms and media while remaining cohesive and easily recognizable. Her signature techniques include collaging printed materials and utilizing patterns and symbols to hint at other worldly spaces.

Feb 11-13 - Dr. Draw
Dr. Draw is an accomplished electric violinist, and is recognized as the "first violinist to venture from rock and classical into electronic music culture". Dr. Draw's practice seamlessly melds an old school instrument with contemporary influences.

Feb 25-28 - Dean Drever
Dean Drever is a visual artist working primarily in sculpture and installation. Drever's work explores themes of power, violence, symbolism, and socio-cultural identity. He is well recognized for his piece Bear Hunt, displayed at the Toronto Sculpture Garden and the Vancouver Olympics (2010).
March 4-7 - Sandra Brewster
A multidisciplinary artist based in Toronto, Sandra Brewster’s practice investigates personal, social, and cultural identity, as well as themes related to representation and identity. Sandra has been the recipient of grants from the Toronto, Ontario, and Canadian Arts Councils. She holds a Masters of Visual Culture of the University of Toronto.

March 18-22 - Peggy Baker
Peggy Baker is an established modern dancer, teacher, and choreographer. She was the first person selected to receive the Ontario Premier’s Award for Excellence in the Arts. She has also been awarded the Order of Canada for Excellence in the arts. In 1990, Baker founded Peggy Baker Dance Projects a non-profit organization that encourages the growth and sustainment of dance programs.
March 25-28 - Rajni Perera
Though Toronto based, much of Rajni Perera's success has come internationally from exhibits in the US and Europe. Perera herself is Sri Lankan born. Her work represents women of colour, contextualized in dreamy and symbolic laden environments.
canadian visual artists contemporary artists drake hotel devonshire prince edward county visual arts