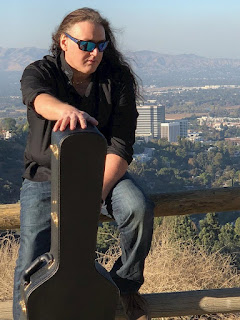 California indie musician Nick Lamb released a couple of singles in February that showcase his range of moods and styles. They come in advance of an album he has planned for May 2018 called Rock N Roll's My Road.

Gettin' High Off You is a punk-flavoured rock song with buzzy guitars and vocals with an insolent edge that's appropriate to the punk. The lyrics cover the usual boy-love object territory in a catchy, ear worm tune. It's radio friendly rock.

For Simple Man, Nick goes soft and acoustic with a simple message about love. What the lyrics may lack in originality, he makes up for in sincerity. The words are sung over nimble guitar picking. There are nice clean guitar licks in both acoustic and electric versions that mark the pair of singles.

Nick comes by the mood of simple sincerity honestly.

He was born into a backdrop of poverty in rural Pennsylvania. His parents, writer Lorraine Lamb and performer Tom Lamb, brought up Nick and four brothers in a coal town where Tom was the local celebrity. He'd play the acoustic guitar and sing all over the area. He died too young, leaving Lorraine as the single mother of five. She kept at her writing in spite of the busy life, and inspired Nick to write along with pursuing music like his father. He went to college late in life at the of age twenty-nine and earned a Bachelor's degree from Pennsylvania State University in film and video production. He then worked to get his Master of Fine Arts in creative writing from Wilkes University.

Nick wrote both songs, and plays guitar and bass on all the tracks. The new album is set to drop at the end of May.

Musicians:
Nick Lamb Vocals and Guitars lead, Rhythm, and Bass, some bass work by Steve Harding, and drums by Johnson Zhang in the studio.