Three Queens-based organizations collaborate to bring the legacy and music of Armstrong into all 62 branches of the Queens Library System
May 14 to June 30, 2018

• Get FREE Tickets To All Events At The Link

QUEENS, NEW YORK: Queens Library has joined forces with Louis Armstrong House Museum and the Kupferberg Center for the Arts @ Queens College to launch a systemwide celebration of the 50th Anniversary of Armstrong's "What a Wonderful World" in all 62 branches of the library with free workshops, concerts, lectures, video, and surprise events between now and June 30th. The celebration includes pop-up events in all 62 branches of the Queens Public Library plus free workshops, concerts, lectures, video, and surprises staging now through June 30th.

"There's so much in 'Wonderful World' that brings me back to my neighborhood where I live in Corona, New York," Armstrong said in 1968. "Lucille and I, ever since we're married, we've been right there in that block. And everybody keeps their little homes up like we do and it's just like one big family. I saw three generations come up on that block. And they're all with their children, grandchildren, they come back to see Uncle Satchmo and Aunt Lucille. That's why I can say, 'I hear babies cry/ I watch them grow/ they'll learn much more/ then I'll never know.' And I can look at all them kids' faces. And I got pictures of them when they was five, six and seven years old. So when they hand me this 'Wonderful World,' I didn't look no further, that was it."

With a grant from the NYC Department of Cultural Affairs, Queens Library, the Louis Armstrong House Museum and Kupferberg Center for the Arts @ Queens College have curated a program comprised of multiple opportunities to celebrate Louis Armstrong's music, history, and belief in "listening to all kinds of music." Performances include lectures by staff and LAHM (include Spanish) and 12 performances by world-class musicians who reflect the diversity of cultures and communities who make up the fabric of Queens. Special arts activities include collage making and other opportunities for participants to share what "makes their world wonderful," and what makes Queens a wonderful world. A video about the song's history and its relationship with the political and social upheaval of the 1960s will be shown in select branches. In addition, programming includes pop-up concerts in all branches.

This year's celebration includes concerts from a selection of exciting local musical artists, each drawing inspiration from Louis Armstrong and underlining his influence worldwide. Highlights include David Ostwald's Grammy-nominated, traditional New Orleans-style group, Louis Armstrong Eternity Band; Min Xiao-Fen's reinterpretations of jazz classics in "Blue Pipa: From Harlem to Shanghai and Back;" Indian-inspired jazz from composer and guitarist Prasanna; pan-African percussion/vocal group Akoko Nante Ensemble; folk band Radio Jarocho mixing the sounds of the Mexican countryside with New York City jazz; and a series of lectures (in both English and Spanish) from experts and archivists from Louis Armstrong House Museum  across Queens.

Here's the current list of free upcoming events as part of the #WonderfulWorld50 program,

June 9: Akoko Nante Ensemble (Jackson Heights Library)
Akoko Nante: Pan-African Music & Percussion
Akoko Nante Ensemble, a Pan African percussion/vocal group, based out of Queens, presents music that has been harvested from the continent of Africa and through its diaspora. They will offer their rendition of 'What a Wonderful World' as well as songs from locales as diverse as the court of the royal palaces of Ghana, the groves of old Haiti, and the seaside shanties of Cuba. Their high energy performances will allow the audience to learn more about the origins of this unique musical genres while being wildly entertained! 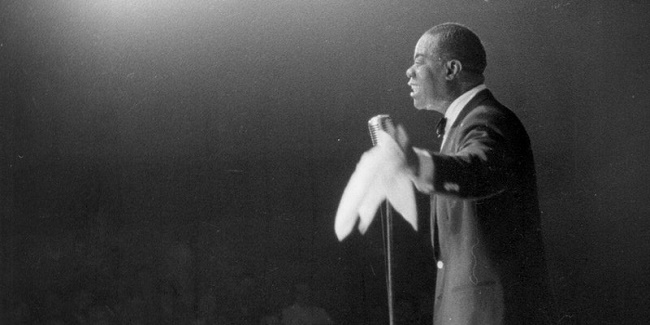