Baltimore soprano Ah Young Hong explores vocal works by composers Milton Babbitt and Michael Hersch in this striking release on the Innova Recordings label. In the works of the two contemporary American composers, she conveys the feeling that drives the often complex modern music. 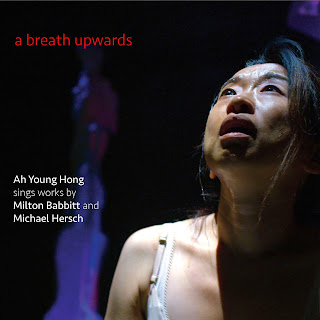 Babbitt’s Philomel debuted in 1964, groundbreaking at the time for its use of recorded vocals and analog synthesizer along with voice. The words, sometimes just syllables, come from poet John Hollander. The story, which comes from Greek mythology, lends itself to an operatice treatment. In a nutshell, Philomel is raped by her brother-in-law, the king of Thrace, who then has her tongue cut out so she cannot tell her sister. She then weaves a tapestry that tells the story. When her sister figures it out, she kills her own son to punish her husband the king. The two sisters flee into the woods - the same woods where Philomel was raped - pursued by the king, and the gods then transform the three of them into birds. Philomel becomes a nightingale.

The gruesome story becomes an emotive journey. The combination of voice and electronics translates into an intense musical experience, with Ah Young Hong ably and elegantly jumping through all the hoops of a virtuosic performance piece.

Michael Hersh's a breath upwards made its debut in 2014. Here, Hong is accomapnied by Miranda Cuckson on viola, Gleb Kanasevich on clarinet, and Jamie Hersch on horn. Their contributions are precise and perfectly complement the vocals. The texts from Dante’s Purgatorio and Ezra Pounds’ Cantos also cover similar ground - running through forests, the flight of birds. There is a real sense of confusion and aching melancholy that permeates the music.

Ah Young Hong has a true affinity for the material. Her voice can pierce or whisper as it breathes life into the spare modernity of the music. She distills the emotion and delivers it along with the notes, by turns eerie, agitated, dreamy. Hong's superb vocal facility, along with the able instrumental accompaniment, highlights the sheer beauty of the works while drawing the listener into the emotional heart of the music on a grand scale.