“Recently, I’ve been trying to be free from a feeling of linear time. This album, Night Wave, is the result of my long search.” The words come from Yuko Fujiyama, jazz pianist and composer. She largely succeeds in her quest in a release that sparkles with an intense sense of creative freedom. The CD includes 15 tracks, the shortest a mere minute in lenghth.

Woven Colours, for solo piano, is kinetic and dynamic, with a dramatic sense of urgency that propels the music. Along with composing all the tracks on the release, Yuko Fujiyama is a talented pianist who brings a fluid sense of expression to all the pieces. Up Tempo adds Susie Ibarra on drums and percussion, Graham Haynes on cornet and flugelhorn, and Jennifer Choi on violin for an explosive piece driven by the clash of cymbals. 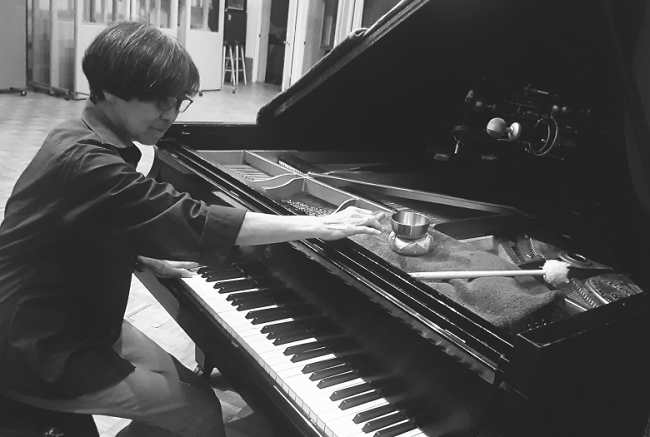 In to the liner notes, Fujiyama describes her pieces with a sense of story and emotion, and there is certainly a kind of whirlwind momentum to each of the eight tracks. Premonition, for piano and drums, is darker and moody, inspired by fear. There's a playful sensibility that emerges in some of the tracks. Fireworks is a standout track, an aural recreation of the flash and colour of the real thing.

In Beyond the Sound, she explores the question, where does sound disappear to? The tones or piano, cornet, and xylophone open up the space, and then resonate into silence. It's both effective and surprising. Starlight, for solo piano, is another highlight, infused with a shimmering beauty that evokes the pure light of celestial objects.

In her bio, Yuko says it was hearing a recording of American pianist and composer Cecil Taylor that led to a realization of the true power of the piano. Taylor was also a classically trained pianist who turned to free jazz, becoming one of its pioneers. Like Taylor, Fujiyama's playing is percussive and innovative.

The discovery of Cecil Taylor led to her moving to New York City from her native Japan in 1987, and a career that she describes as “looking for musical structures” ever since.