Travel the world and participate in an immersive theatrical experience, beginning in Barrie, Ontario, and culminating in a musical theatre performance in a secret, intimate location in London, UK. It's the brainchild of Arkady Spivak, Artistic Producer of Talk Is Free Theatre (TIFT), and it's taking 36 people on the theatrical experience of their lives later this fall.

Arkady approached director Mitchell Cushman and other collaborators with the idea about two years ago. "To be honest, I though it was a really interesting idea, but I wasn't really sure it would ever happen," Mitchell admits. Certainly, the logistical challenges and many partnerships that had to be made were formididable. "It took all manner of creative logistical thinking," Mitchell says. "He probably thought I was crazy enough to take it on."

Crazy, perhaps, but also someone with a track record. "I've been involved in a number of experiential theatre projects," Cushman says. In fact, he's Co-Artistic Director of Outside the March, one of Canada's leading site-specific theatre companies. https://outsidethemarch.ca/

Daniele Bartolini will direct the first three days, which begin in and around Barrie. Bartolini will create what is being called "a trail of breadcrumbs" that will lead audience members along a narrative trail that may include (seemingly) random encounters with strangers, top secret assignments, and even their own hotel rooms.

The Barrie leg of the voyage will incorporate the work of 60 local teens engaging in the creation process under the guidance and mentorship of professional artists.

On the third day, traveling audience members be taken by shuttle to Pearson Airport in Toronto, where they'll fly to Heathrow. In London, they'll stay at Morton Hotel, a 34-room boutique hotel with historic charm located overlooking Russell Square in tony Bloomsbury. Any free time can be spent exploring Covent Garden, the British Museum, and the shops of Oxford Street - all within walking distance. 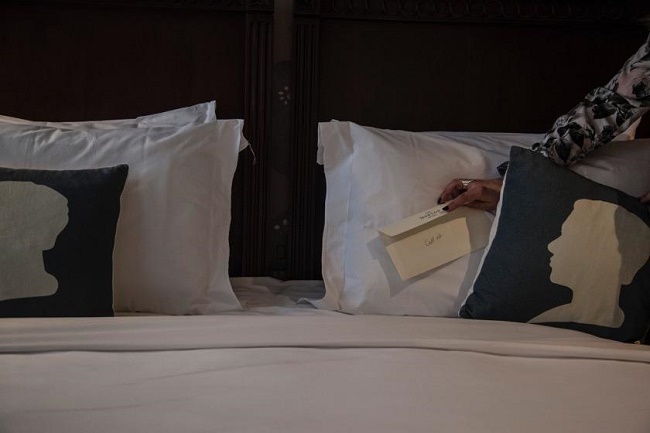 In London, the next day, the journey continues, taking audience members off the beaten path to various locations. The experience culminates in a performance of a Tony Award winning musical, directed by Cushman, in an intimate and secret venue. The musical’s cast will feature a mix of well known Canadian and UK-based talents, including Talk Is Free Theatre audience-favourites David Coomber, Izad Etemadi, Craig Lauzon, Mike Nadajewski, Glynis Ranney, and Michael Torontow, among others. But, while the story may be familiar, it's a performance with a difference.

As Cushman describes it, those narrative breadcrumbs will lead the audience to experience the final show, which they may already be familiar with, in an intimate and personal way. It should give them a new look at familiar characters and story. "They will come away with a sense of what the play means to them as an individual," he says. The process makes audience members into much more than passive spectators.

At the very end of it all comes the finale and a reception with all the cast and crew.

The project follows TIFT's success with staging The Music Man as a traveling site-specific work in 2016. The piece took audiences all around Barrie, Ontario.

It promises to be an adventure for the curious traveler and theatre lover.

About Talk Is Free Theatre (tift.ca)
Talk Is Free Theatre (TIFT) was founded in 2003 in Barrie, Ontario and has since produced 84 works. The company is Central Ontario’s only professional Equity company with a full winter season. TIFT produces a wide range of work from the periphery of mainstream, concentrating on new writing, forgotten classics and drastic re-examinations of established repertoire. TIFT is particularly dedicated to esoteric works of musical theatre and in forging new types of site-specific, immersive creation, among others. Most recently, TIFT staged the roving, site-specific production of The Music Man and toured the highly successful Tales of an Urban Indian staged on a moving city bus.

Here's a sampling of that production: