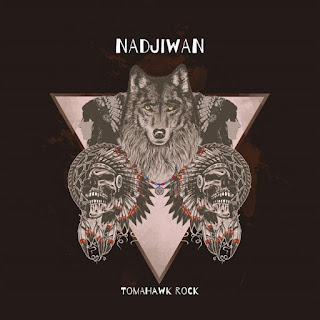 The highly anticipated release from multi-award nominated indigenous rock project NADJIWAN titled 'Tomahawk Rock' is set to be released August 5th, 2018. The release will be highlighted by a live FREE concert at the Grace Hartman Amphitheatre in Sudbury, Ontario.

'Tomahawk Rock' was recorded live off the floor in old school house over 2 days and showcases the classic NADJIWAN indigenous rock sound. Released by Heading North Music and distributed by the Independent Digital Licensing Agency the new release will be available world-wide in August.

The man behind the project and the music is Marc Meriläinen. Born in northern Manitoba and raised in the untamed beauty of Northwestern Ontario, Marc knew from an early age he would perform music.

After graduating from the Music Industry Arts program at Fanshawe College in Southern Ontario, Marc returned to Thunder Bay where he began collaborating with other First Nations musicians. The first NADJIWAN compact disc titled "Brother", released in 1995 went on to achieve much success in both Canada and the United States earning him an nomination for BEST ROCK ALBUM at the Native American Music Awards as well as the #1 album spot on the Aboriginal Voices Top 10.

NADJIWAN will be performing in Sudbury at the Grace Hartman Amphitheatre Sunday August 5th.  Show starts at 7PM and is open & FREE to the public.