Love music - and travel? Who doesn't? Come along for a state-of-the-art vision of Cuban rumba, featuring 17 of the slammingest groups / soloists in spectacular sites around Havana. We call it a seminar, but you could call it a festival; both are true. 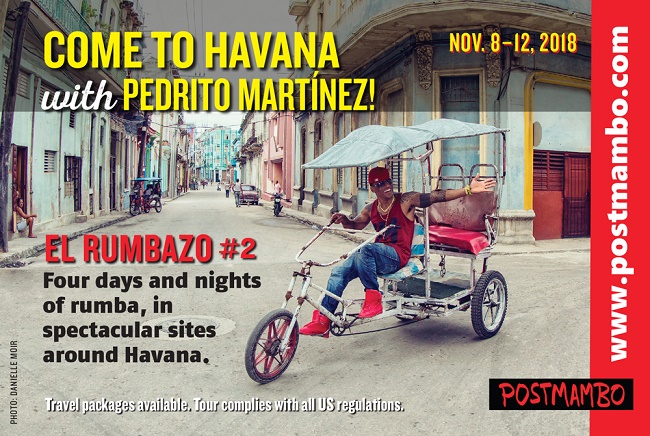 This is a history-making rumba summit.

I'm Ned Sublette, and my company Postmambo Studies, Inc., takes people on educational music travel in Cuba. We've covered the length and breadth of the island in the three-plus years since the US opening to Cuba of December 17, 2014. It's 100% legal for US citizens - and of course Canadian citizens too.

Participants in last year’s El Rumbazo heard eight sets in the first 36 hours. It's off the chain, and it's educational, and 100% legal for US travelers. In the course of our study of Cuban rumba, we'll hear 18 different groups in a whirlwind 4 days and nights around Havana. If you know rumba, you know this is the ultimate. Our guest of honor, Pedrito Martínez, is internationally the best-known conguero of his generation. He's coming back to his home town to play, and it's going to be incredible. 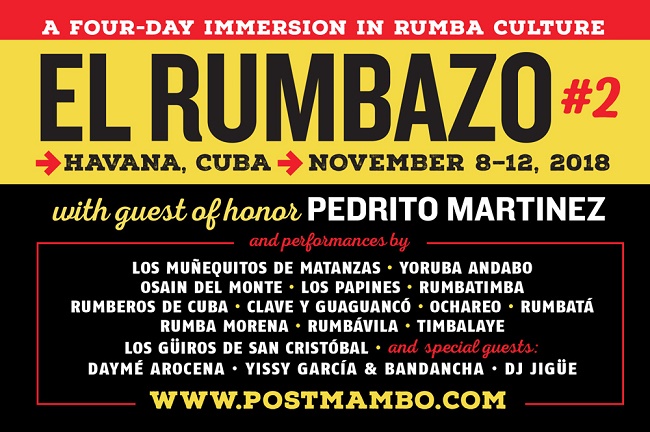 Pedrito will play a reunion concert with Yoruba Andabo, the group he was in before he came to the US in 1998, and he'll sit in with the world's greatest rumberos, including the legendary Los Muñequitos de Matanzas, as well as with Osain del Monte (who together with Pedrito played the Rolling Stones' party in Havana in '16). Besides the rumba stars of Havana, El Rumbazo #2 will bring to Havana killer groups from Cienfuegos (Ochareo), Camagüey (Rumbatá), Ciego de Ávila (Rumbávila), and of course Matanzas (Los Muñequitos, Rumbatimba).  Special guests include new Cuban superstar pop sensation Daymé Arocena, drummer Yissy García with her group Bandancha, and Cuba's #1 electronic music artist, DJ Jigüe. There will be dance workshops, and encounters with musicologists, historians, and practitioners.

Havana is one of the safest places you can travel to, and it's never been easier and cheaper to fly to Cuba from the US and Canada.

• Register for the seminar: info@postmambo.com

Postmambo Cuban Music Seminars bring people from the US and worldwide to Cuba for close-up, informative encounters with masters of rumba, son, jazz, timba, cha-cha-chá, many varieties of African-descended religious music, and much more. These are highly scheduled, culturally immersive itineraries with one to four live music events a day -- “people-to-people” travel, according to US OFAC regulations.

Postmambo Music Seminars are open to the general public, with no prior qualifications necessary for participation. Each seminar so far (there have been 7 to date) has included professional musicians as travelers, as well as producers, filmmakers, anthropologists, writers, and all sorts of music fans. What all participants have in common is a love of the music and a desire to go deeper into it.