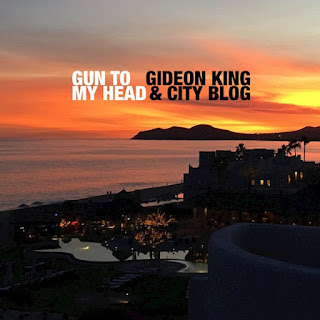 "This song is about L.A. and New York and how when the rubber meets the road, I'll take NYC. It's about writing music against the backdrop of both of these towns. This song also speaks to the idea that trying to make it alone in life is a fool's errand. Also, there was this weird serial killer in L.A. that frightened me. He is in the tune too. Hope you like the song!" (Gideon King)

Fluid musicianship and a relentless groove make this track a keeper. Gun To My Head, despite the violence of the title, begins softly with acoustic guitar, and a riff that comes straight outta the Baroque Era. After a jazzy segue, it settles into a jazzy groove. As always, Gideon has chosen a roster of talented musicians to flesh out the music. Here, it's a quartet made up of Marc Broussard, John Scofield, Nate Smith & Donny McCaslin.

While the beats are driving, it's more of a whimsical meditation on the current madness of the world than a depressing rant.

New York City-based jazz guitarist Gideon King formed the band and released a full length CD, City Blog, in 2015. A veteran of the NYC scene, he's worked with the likes of John Scofield and members of Steely Dan, among others. 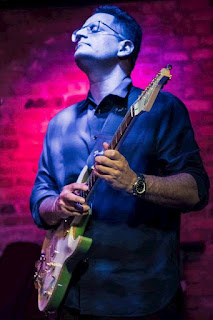 The album Upscale Madhouse, which comes out next March, is characterized by a sense of invention, and blends a variety of influences under the big tent of jazz, including electronica, rock, and adult contemporary pop. The mood ranges from reflective to sexy and langorous through to vibrant and danceable. Gideon uses a wide range of collaborators, with an emphasis on superb vocals that really elevates the release above the herd.

The new single is a prelude to a polished release of multi-layered fusion to look forward to next spring.

From a recent performance: