So says Fadwa, one of the young women featured in Naziha Arebi's documentary Freedom Fields. It's that ability to keep picking up the pieces to keep going that is highlighted in the movie, which got its World Premiere at the Toronto International Film Festival in September 2018. 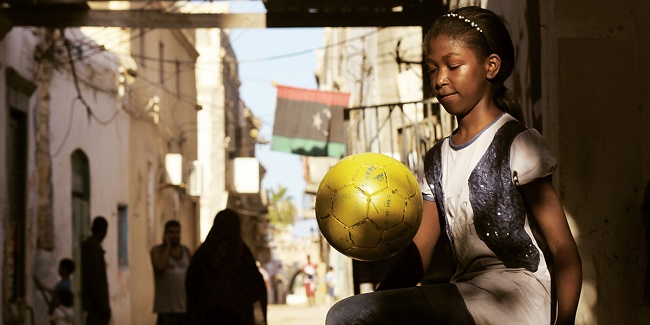 Ever wondered what's been going on in Libya since its "liberation" at the hands of Western jet fighter pilots? British-Libyan director Naziha Arebi's documentary fills in the gaps with her film that looks at the trials and triumphs of a group of women determined to play football - soccer for us North Americans - for their country.

Making the movie proved to be just as much a labour of love and perseverance as the making of the women's football team. Naziha shot the footage over a four year period between 2012 and 2016.

In the beginning, there are dizzying street scenes - the rush of optimism that came with the revolution and assassination of Ghaddafi. But then reality sets in. Some scenes have to be shot by candlelight when the power goes out. The army is an ever present shadow, the shells and gunshots ringing out. 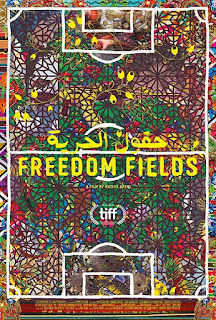 On the field, we see the competitive spirit come out in the women, who have come from all over the country to pursue their impossible dream. Determination, will, strength - it's their pre-game chant. Finally, they seem to be getting somewhere, and their first international meet is set up under the auspices of the national football association.

But...two years after the Revolution, the religious right has taken over. Then some ultra-conservative clerics get involved, and preach against the idea of a women's team. A Facebook page is set up in opposition to the team, and to their dismay, the football authorities crumble, and cancel the team's match.

Arebi provides the cinematography as well as directing the movie. The camera is intimate, giving us the real impression of being let inside the lives of these women. We ride with them in the car, and pace anxiously on the sidelines as they play. Her aesthetic is poetic and artistic, finding beauty in the blur of streetlights, and poignancy in shots of little boys who play ball without a care.

We see the women in their everyday lives, and the pressures they - and their families - face. Their own brothers weigh in on the situation. The frustration at seeing their lives always subject to patriarchal approval is clear, even as they clearly also still see themselves as part of the same society. Why can't girls play? they ask - particularly when other strictly observant Islamic countries like Saudi Arabia already have women's football teams. The barrier is cultural, not really related to Islam at all.

"Everyone hates us in this country," one of the women says ruefully.

Is the story over? Not for this group. Four years after the Revolution, the team picks up steam again as they push for a match without Football Federation approval.

After growing up with her mother in the UK, Naziha moved to Libya to live with her father. "I became obsessed with my own Libyan identity," she says. Her father, and then she too, became involved with the Arab Spring uprising.

Not long after that, she recalls hearing about this mysterious women's football team. "It was a team no one had seen," she laughs. "I found them...after some time." Naziha was writing already, and soon developed a friendly relationship with the nascent team. "They were fun to be around," she says. "The story was constantly changing." 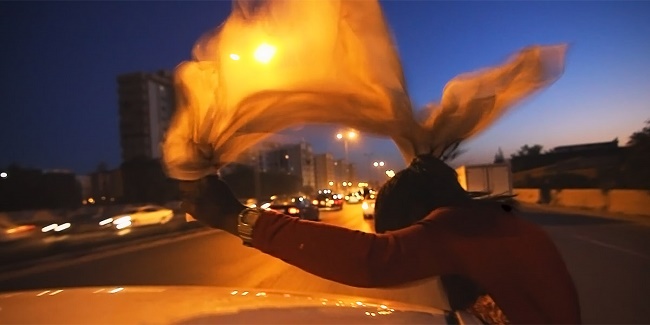 At that point, in 2013, Naziha thought the story was finished. But, the optimism and grit of the team made her hang on with them. "At that point, that's where the movie goes into their personal lives," she notes.

Fadwa is one of the players featured in the movie, and she made the trip to Toronto with Naziha - the only one of the players who could in view of the current unstable conditions back home. "I played football since I was really young. When you are little, you play outside with the boys," she recalls. At a certain point, however, little girls are separated from the play. "They want you to go inside." She heard about the women's team and knew she had to join them.

Fadwa dealt with the pressure from the religious fundamentalists on a personal level. "The whole community was against it," she says. She was determined to plow on regardless. "If you allow them to have an opinion, they will state it."

"It's a cultural thing," Naziha says, pointing out that, in contrast to the official government opposition, there were many individuals, men and women, who helped the team along the way, including coaches and the man who let them use his field.

In the end, the team chose to disconnect from the Football Federation and form an NGO dedicated to opening up the world of sport for young girls.

"It's education, working on the next generation," Naziha says.

"At the beginning, all we wanted to do is play," says Fadwa. "We gained from it in all sorts of ways. It can change girls lives." She recalls recently visiting a school to work with the girls. "We were surprised that some girls don't even know how to run."

The benefits of sports education are many and well documented. "You can own your own body, your own space," Naziha says. She also notes the still turbulent conditions of Libya today. "Giving people a release is important. This generation needs it."

Play on, sisters, play on.


If you're in the UK, the movie screens next at the BFI London Film Festival in October 2018.