Indie World Cinema: A Moment In The Reeds - Available in Canada & the US December 4 2018

Indie World Cinema:
A Moment In The Reeds

The feature debut of Finnish writer/director Mikko Makela is a moving gay romance between a young Finnish academic and a struggling Syrian refugee, set against an idyllic Finnish summer. Filled with nuanced and sexually charged performances from the film's two openly gay leads, Finnish theatre actor Janne Puustinen, and openly gay Syrian actor Boodi Kabbani (who fled Syria and eventually settled in Finland, where he is based - he is one of the very few openly gay Syrian actors in the world), A MOMENT IN THE REEDS is a potent, inherently political, and remarkably mature exploration of an LGBT immigrant refugee's experience in today's world. One of the first LGBT-themed films made in Finland, Makela's intimate drama places at its center the freedom and acceptance of sexual and ethnic minorities, amidst the backdrop of breathtaking Finnish lake country.

Indiewire called it "one of the best queer international films of 2018," and Edge said the film is "a fresh new voice in queer cinema...pitch perfect performances." Film Inquiry wrote "one of the most moving gay romances of recent years...full of sexually charged, intimate moments." 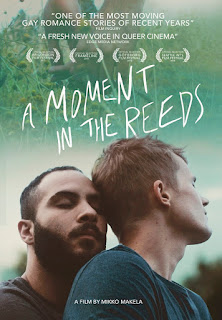 After world premiering at the 2017 London Film Festival and a year of critical success on the worldwide festival circuit, the film was nominated for The Discovery Award at the British Independent Film Awards. It also opened theatrically to critical acclaim in Finland this past summer. A MOMENT IN THE REEDS will now be available for all U.S. and Canadian audiences.

FILMMAKER BIO:
Mikko Makela, born and raised in Finland, is London-based filmmaker and actor who, feeling compelled to fill the queer void in Finnish cinema, decided to return to his native Finland to make his debut feature. Since studying English Literature and French at Nottingham University and University College London, Mikko has directed music videos and fashion films in London alongside working as an editor in drama and commercials. Having also studied Drama at City Literary Institute, he was earlier this year seen acting on the stage in the Arcola Queer Collective's revival of Mae West's 'The Drag' as well as making an appearance in John Cameron Mitchell's film 'How to Talk to Girls at Parties'. A MOMENT IN THE REEDS is his debut feature film.