It may seem odd to list a city under the category of "off the beaten path". There are highways that lead to the capital of Alabama, to be sure.
But, it's also a fact that both TSA agents I encountered on a recent trip to Birmingham, in Toronto and the airline rep in Atlanta, questioned why a nice lady like me would be on my way there. I saw a distressing amount of poverty in the outlying suburbs - empty houses falling down on every block, properties seemingly untouched since the subdivisions were built in the mid-twentieth century.

But, there are jewels that still sparkle in the matrix of a Southern belle who may have seen better days, and ones that are worth preserving and visiting while you are touring the American South. A boost to the local economy, based largely on small businesses and not so many large box stores would only benefit. You can check with organizations like the Birmingham Black Business Directory, and general tourist information at Birmingham.org.
There are some definite plusses to a visit to Birmingham:

• It's so affordable! You'll find both meals and accommodations at prices you won't see anywhere south or north of here.
• The whole downtown is within walkable distance, with streets of scenic architecture punctuated by small parks. 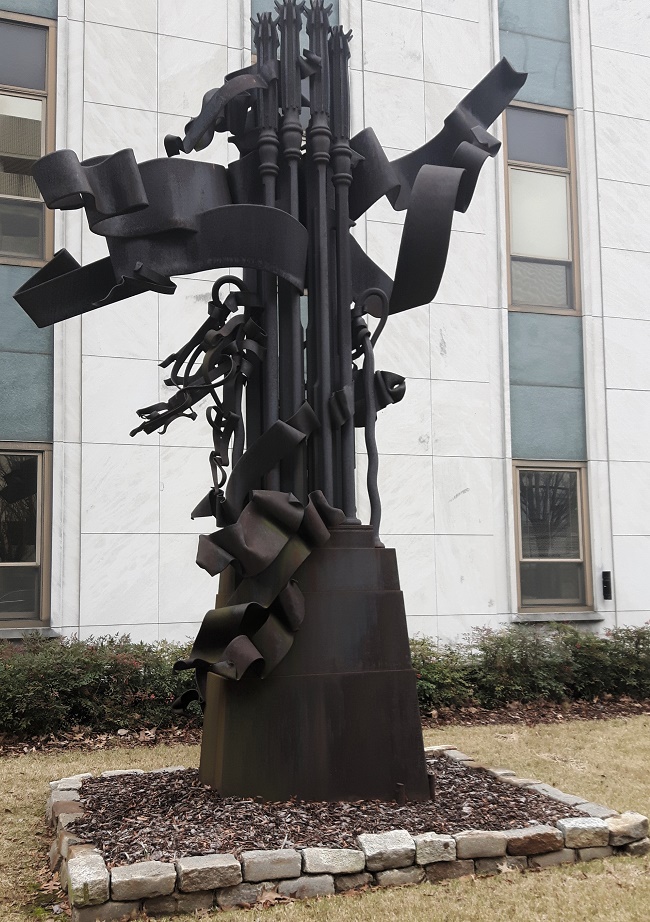 Here's a walking tour of Birmingham that will easily fill up a weekend with some interesting spots to check out. Start towards the northwest, on 6th Avenue North near the Alabama Power Company building.

You are never far from the ghosts of the past in Birmingham, and the struggle for Civil Rights that continues today. Right at the intersection of 16th Street and 6th Avenue North, you'll find the 16th Stret Baptist Church. It was the site of a bombing when members of the Ku Klux Klan exploded several sticks of dynamite attached to a timing device on Sunday, September 15, 1963. The blast killed four little girls and injured 22 others. The horrific bombing set the stage for an added push that resulted in the passing of the Civil Rights Act of 1964. The church is designated as a National Historic Landmark.
Across the street, along 16th Street, the Birmingham Civil Rights Institute houses exhibits and other information about the era. 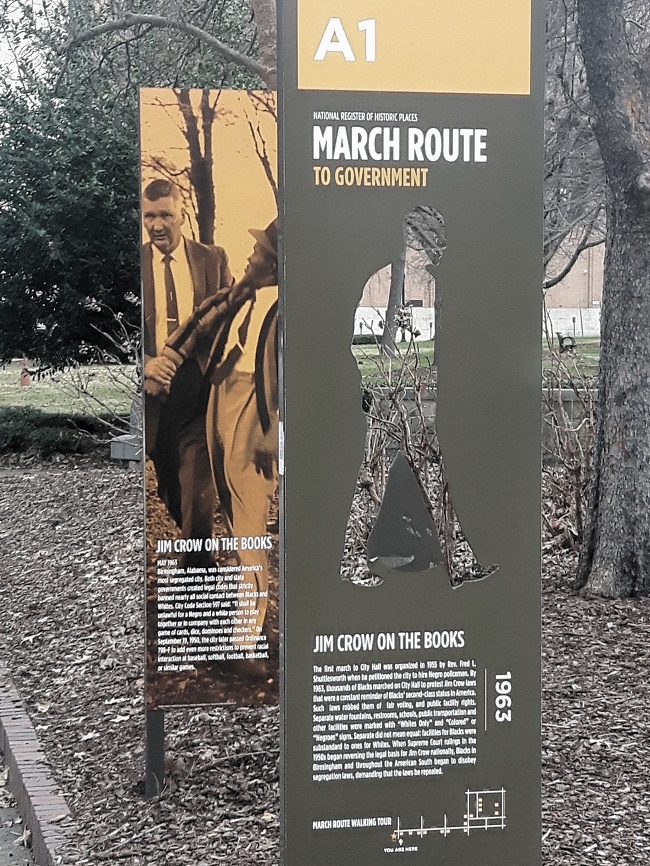 Poignant sculptures dot Kelly Ingram Park, directly across 16th Street and bordering 6th Avenue North. It's where leaders of the Southern Christian Leadership Conference, and other civil rights groups, met during the chaotic period to organize.

Any movie location scouts out there? While Birmingham's general skyline is fairly modern, you'll find streetscapes that look as if they've been untouched since the 1950s or 1960s. If you're a fan of mid-century architecture, you'll love the vibe.

There are a number of small parks you can wander through as well, including Linn Park, with the Birmingham Public Library, and government buildings on one side, facing the Birmingham Museum of Art on the other.

It would make a lot of sense to plan a weekend trip around a show at one of the city's fabulous performing arts and theatre venues. Here's a quick look at the details. 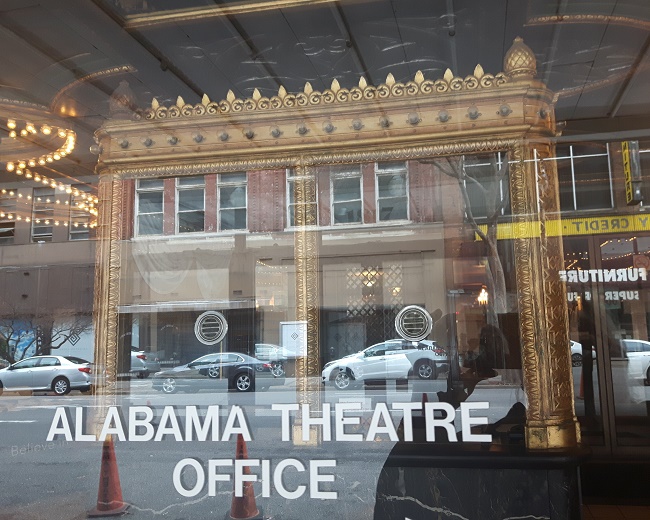 The Showplace of the South since 1927, Alabama Theatre on 3rd Avenue North is a jewel box venue so pretty that you might just want to catch a show to be able to check it out. The venue features a combination of live music, classic movie screenings - including sing-along and costumed shows, and the music of the Mighty Wurlitzer organ - orchestral concerts, ballet, and more.

It's been the only year-roiund professional musical theater company in Alabama, with bigger shows during the summer staged at the Dorothy Jemison Day Theatre in the Alabama School of Fine Art, and a home base at the Cabaret Theatre in the basement of the historic Kress Building. 301 19th Street N. | 205.324.2424 | redmountaintheatre.org

Built in 1914 for traveling vaudeville shows, the Lyric Theatre has superb acousitcs and a decor reminiscent of the opulence of yesteryear, with marble floors and staircases, a 28-foot mural in the lobby, and intricately decorated boxes in blue and gold. 1800 3rd Ave. N. | 205.252.2262 | lyricbham.com

Founded in 1978, the Alabama Jazz Hall of Fame is dedicated to recognizing the contributions of Alabama's jazz greats.

The Carver Theatre opened in 1935 in the Fourth Avenue District, originally a movie house. It was historically one of the few places African Americans could attend first-run film screenings during the days of segregation. It closed in the 1980s, to be revived by the Alabama Jazz Hall of Fame in 1993 as the Carver Theatre for the Performing Arts. The facility includes a large section of permanent museum exhibits along with a 515-seat theatre.

If you have kids, or just a child-like sense of curiosity, the McWane Science Center has a lot to offer. It's seen millions of visitors since opening in 1998, drawing them with a combination of exhibits and interactive displays.

You'll find aquariums with fascinating fish and sea life, interactive and designed to keep kids busy for hours, including the Bubble Room, a race track, and IMAX Dome Theater, and of course - the dinosaurs!

As they tell it, the state of Alabama is the "best place east of the Mississippi River" to find dino remains. The Center houses actual fossils from several local species, including the Alabama tyrannosaur or Appalachiosaurus, a 22 foot long cousin to the dreaded T-Rex, the Nodosaur, an armed spiky herbivore, the Dromaeosaur, a 9 foot long cunning carnivore in the Raptor family, and the Pteranodon, a flying lizard.

I try to find the places that are busy with locals, and that's what guided me to these picks - all of them located in the downtown core.

• Just coffee please? The stylish Revelator Coffee Company on 3rd Avenue North (facing the McWane Science Center) is a coffee roaster as well as coffee shop, so you can expect the finest brews of the bean here.

• Casual dining done right - The Paramount offers a tasty menu of fresh foods, crafty beers and cocktails, and a small gaming arcade section to keep the kids young and old amused. The prices will please your budget, and your tastebuds will enjoy the handcrafted burgers, sandwiches, salads, soups, and more.

• Looking for something upscale? The Café Dupont is the brainchild of chef Chris Dupont, a native of New Orleans who brought his know-how from years of working with luminaries like Emeril Legasse to his "slow food" philosophy. You'll find an imaginative menu that features locally grown produce and meats. Located in a charming circa-1870 storefront building in the city's historic North End

• Staying over night? The Vault Bar & Lounge is the place to be for creative cocktails and dancing to DJs till late.

Drone shots above the city: