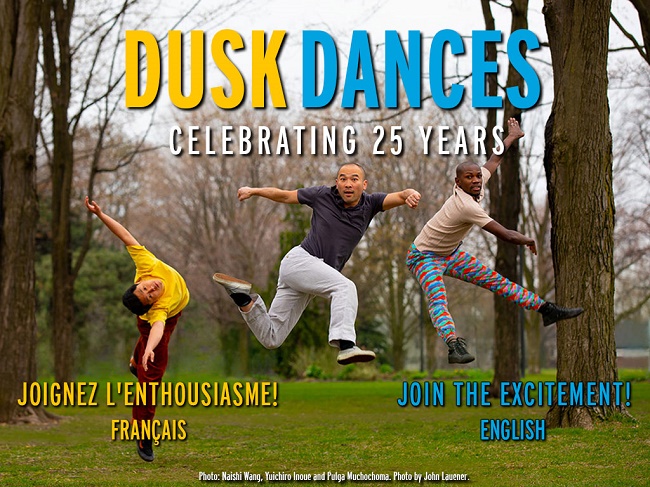 For the 25th anniversary, Dusk Dances will be hosted by the sensational Madame Beaucoup (aka Lisa Anne Ross) who hosted the event from 2006 to 2009. Madame Beaucoup will lead the audience to various sites throughout the park. The evening will begin with FREE square dance workshops with professional caller Hannah Shira-Naiman, accompanied by live music.


A BIT MORE ON THE PIECES PRESENTED
IN THE DUSK DANCES 2019 PROGRAM:

Why do we feel how we feel? Love makes us act in certain ways. Fall explores the emotional roller coaster of falling in love! A Dusk Dances commission and a world premiere.

2018 Dora winner HANNA KIEL is from Seoul, South Korea, and moved to Vancouver in 1996. She has presented her work at 12 Minutes Max, Plan B Singles and solos Festival, Dancing on the Edge Festival and Pulse at the Scotiabank Dance Centre in Vancouver. In 2012 she won Northwest Dance Project’s ‘Pretty Creatives’ international choreographic competition. She was an E-choreographer in 2015 for Springboard Danse Montréal and one of the choreographers at Osez 2018 in Québec City. Hanna is the artistic director of Human Body Expression and one of the founders of “The Garage” dance development and exchange collective group.

To imprint is to impress or stamp - to leave our mark. We carry with us these marks and stamps and those of many others whom have crossed our path. Imprint explores these impressions - and our interdependence on one another. At any given moment, we exist and live suspended by ten thousand threads of connection and interdependence. With a large cast of performers ranging in age from 8 to 80, this group work is a physical tracing, collision, and reflection of these threads and marks, at many of life's stages. A Dusk Dances commission and a world premiere.

MEREDITH THOMPSON is a Toronto-based dance artist, dance maker and arts educator originally from Huntsville, Ontario. She has performed throughout Canada and beyond with BoucharDanse, Dancetheatre David Earle, the Danny Grossman Dance Company, Mairéad Filgate, Tina Fushell, Kaha:wi Dance Theatre, Barbara Lindenberg, and Yvonne Ng, among others. Meredith is a graduate of York University’s Department of Fine Arts and Faculty of Education. 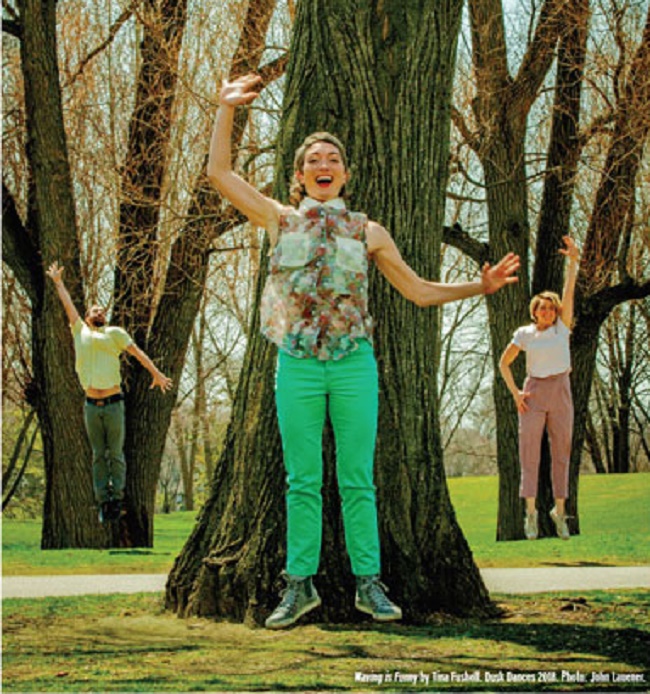 Do our individual perspectives change if we are in a space together? Connections come and go as we discover the truth within our body and mind through various paths. The goals of the movement that connects us, where our decisions influence one another, are based on three basic changes: rhythm changes, movement changes, and life changes. As we make movement choices, we also accept that those choices change on a daily basis. However, we cannot change the truth that lives in our body. Being free to share our experiences is what makes us who we are. A Dusk Dances commission and a world premiere.

YUICHIRO INOUE has danced with the Toronto Dance Theatre for the last thirteen years. As a choreographer, his works have included commissions for an award-winning short film, festivals and international competitions.

PULGA MUCHOCHOMA was born in Quelimane, Mozambique. His dance career and training began in Quelimane with Montes Namuli Dance Company. In 2006 he came to Toronto with the company for the International AIDS Conference. With Montes Namuli / Shakespeare Link Canada, he performed in several shows in Toronto and Mozambique. Muchochoma then stayed in Toronto to study at The School of Toronto Dance Theatre, and since 2009, Pulga has been working with Toronto Dance Theatre under Artistic Director Christopher House.

Born in Changchun, China, NAISHI WANG began his dance training at Jilin College of Art and Beijing Dance Academy. In 2004, Naishi joined Toronto Dance Theater for 9 years. In 2019, Naishi is creating a new work on Toronto/Halifax based company Nostos Collective.

Follow Me was created for the 2017 Jeux de la Francophonie in Abidjan, where Mix Mix Dance Collective was selected to be part of Team Canada as part of the cultural component! Their motivation for competing in the games was to celebrate the excellence in artistry, athleticism, and expression Canada has to offer. The work has been performed at Guelph Dance Festival, Fall For Dance North, and Winterlude. A Dusk Dances premiere.

EMILY LAW is a contemporary dancer, street dancer, and emerging choreographer. She graduated from The School of Toronto Dance Theatre and The Etobicoke School of the Arts. She has trained and competed in house dancing and waacking. Emily is a founding member of Mix Mix Dance Collective, the Toronto house dance crew Warehouse Jacks and Parks N’ Wreck.

ASHLEY PEREZ "Colours" is a dancer, choreographer and entrepreneur making waves in the Canadian dance scene. Ashley is the Co-artistic director or Mix Mix Dance Collective with whom she has co-created two full length works and recently represented Canada at 2017, Jeux de la Francophonie in Abidjan.

We find the world in difficult times, where people are becoming increasingly polarized, taking sides with rancour and falling for simplistic solutions. We are curious about how to embrace complexity with skill and grace, and how to stay open, kind and uplifted in the midst of turbulent times. With Moving Parts, we are investigating these questions with a moving choir and singing dancers. A Dusk Dances premiere.

DENISE FUJIWARA began a series of careers starting in childhood as a gymnast.  She became a Canadian Champion in Rhythmic Gymnastics and competed internationally for Canada.  Upon completing an Honours B.F.A. in Dance at York University, she co-founded T.I.D.E. (Toronto Independent Dance Enterprise), a now-defunct but still notorious company that danced across Canada for 10 years.