Glenfiddich Artist in Residence Exhibition July 27 to August 25, 2019 at the Glenfiddich Distillery in Dufftown, Scotland

Glenfiddich Artist in Residence Exhibition
July 27 to August 25, 2019
at the Glenfiddich Distillery in Dufftown, Scotland


Love art and scotch? If you're in Scotland this summer, you owe yourself the opportunity of taking in a unique art exhibition in a unique location at the Glenfiddich Distillery in Dufftown - the Valley of the Deer in the Scottish Highlands. You may naturally also choose to sample the distiller's art while you are there. 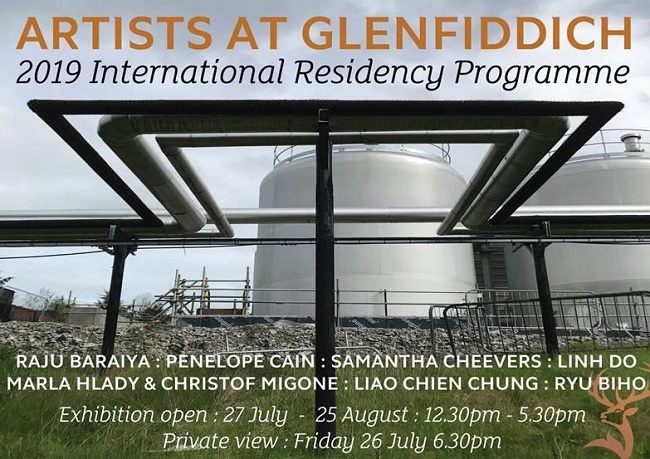 For the past 18 years the Glenfiddich Distillery has been honoured to play host to an array of visual artists from around the world.

Each artist spends three months living and working at the distillery, harvesting ideas and inspirations before distilling them down into a fresh range of visual interpretations that  document their experience in The Valley of the Deer.

Since arriving in early May, Marla Hlady and Christof Migone - a collaborative partnership from Toronto - have spent many hours collecting sounds from all areas of the distillery. The sound of water rushing from the Robbie Dhu spring in the Conval hills, the daily actions of our coopers and warehouse teams, the clinking of bottles as they go down the filling lines have all been merged with a special arrangement of vocal recordings made by many of the workers in an audio piece entitled the Doric Dozen.

A recent graduate of Gray’s School of Art in Aberdeen, Samantha Cheevers was selected for the Glenfiddich residency at the New Contemporaries exhibition held at the Royal Scottish Academy of Art and Architecture earlier this spring. Samantha has been exploring some of the abandoned former family homes and hunting lodges scattered across the Cabrach to the south of the distillery.

Taking inspiration from the memories of inhabitation they contain such as wall papers or long disused arm chairs she has created a range of her distinctive and evocative paintings.
Over the past few years Korean artist Ryu Biho has moved from painting into videography, capturing his subject matter digitally rather than on canvas. Presenting a triptych  of video works shot over the past two months Biho’s work offers a thoughtful and atmospheric rendering of the landscape around the distillery.

Dufftown
This village in the Scottish Highlands is located on the rivers Fiddich and Dullan, at the foot of the Conval Hills. A market town, it has been dubbed the malt whisky capital of the world. Dufftown offers an authentic taste of Scotland.