• Stream it on Spotify
• Get it on CDBaby

Singer/songwriter Marva Holiday has a message.

"One of my goals is to inspire older women," says Holiday. "I will demonstrate that it IS possible to dust off one's deferred dreams and 'go for it.' Age is nothing but a number. Making music, whether mine or that of others, energizes me. I will write and perform as long as there's an audience."

She's dusting off a cover of the Bee Gees hit To Love Somebody that she recorded a few years ago with the help of Joe Chambers, former lead singer and songwriter of The Chambers Brothers, (probably best known for the '60s rocker 'Time'.) Joe fronts his own group in Los Angeles, The Joe Chambers Experience.

Marva's version brings the song back to its RnB roots, with a laidback groove, and the vocal lines dancing around each other, rather than the lock-step harmony of the original version. Churchy organ and bell-like piano tones create interesting layers to the melody.

Best known for the irresistible Northern soul staple "It's Written All Over My Face," singer Marva Holiday was born in San Jose, California and and raised in South Los Angeles and Compton, CA. Her half-sister Yonnine was the daughter of jazz immortal Charles Mingus, who served as a kind of surrogate father to Holiday as well.

Marva's been a singer since her teens. Back in 1971, she was a staff writer with Motown Records' publishing arm, Jobete, for two years. She retired from performing briefly in 1977 to co-found the Scrunch Music publishing company, and later her own label, Zipporah, and returned to the stage as a gospel performer. 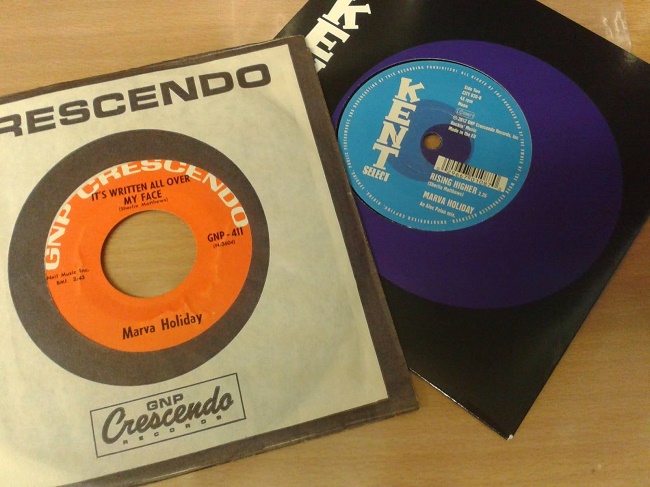 While she took time off for family, and unknown to her, Marva was becoming a sensation in Europe in the 1970s as part of the so-called Northern Soul movement. Northern Soul reveres 1960s sould singers, and many who were not famous the first time around have seen their stars rise since then because of it.

During her hiatus from the music biz, Britain's Northern Soul movement never forgot her collaboration with Sherlie Matthews, the 1967 single Woman In My Eyes. Growing interest led to her 2005 UK debut at the Cleethorpes Mirwood Revue

Holiday's remake of "To Love Somebody" heralds a new phase in her music career which she calls "Part Two." "It's difficult for female performers who are middle-aged and older to return to the music business once it's decided that they're 'too old,'" she notes. "I was pushed out of the industry by ageism, but I'm not letting that stop me from coming right back, right now!"

Marva is planning to release an original composition, "Reflections" by early 2020, with an EP of original material to follow.