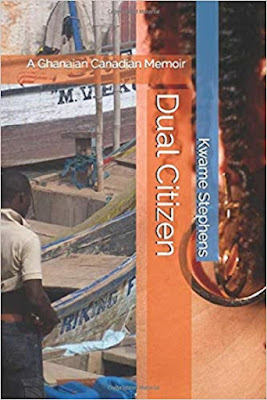 when dawn breaks
tomorrow, when the dawn
breaks
I will be miles away
on my way to a new land
quite different from this one

In 1989, Kwame Stephens packed up his life in Ghana and immigrated to Toronto, Canada. At the time, he felt he was making a brand new start, and would be sowing new and permanent roots in his new home - even if certain aspects of his new landscape were dismaying.


It was in March 1989 when I made my first Trans Atlantic fight from Amsterdam to Toronto. I remember looking below from the plane and seeing fields of white snow. I’d seen snow before. It snows in Lesotho in Southern Africa where I'd visited twice in my teens. What freaked me out was the “snow as far as my eyes could go”.

The book is an intimate portrait of his life and travels, with pictures, and poetry that adds a different perspective and slant.

He's candid about issues like his dismay at the differences between his new, freer life in Canada, and the old rules of Ghana, and the mixed feelings it engendered.

Gradually, over time, the lure of his homeland drew him back, and over multiple visits, even as he settled into Toronto's multi-ethnic vibe, made friends, and his new life, he came to understand his true nature was that of a citizen of both worlds. It's an absorbing and engaging memoir that looks at the realities of immigrant life.
autobiography memoirs