“I'm doing something ancestors could not do when they stepped on the soil of Canada—the Chinese head tax, residential schools, #metoo, spouses kept apart right after their marriage because of the so-called immigration backlog—history can't be rewritten but hopefully can guide us to a more just future.”—Moolchand

Montreal, February 2020- First produced at the Strathearn Intercultural Centre to critical acclaim and subsequently translated into French as L’Affaire Farhadi with similar success, the themes in Counter Offence are as current as ever. With this in mind, multi-award winning, published playwright and Teesri Duniya Theatre artistic director Rahul Varma has updated his play to further heighten the relevancy. 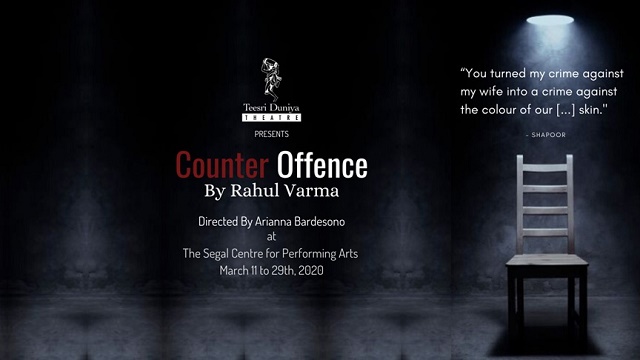 In counterpoint, domestic violence and racism blur, distorting the issues while officials satisfy their own agendas. Teesri Duniya Theatre is proud to present this important show playing at the Segal Centre for the Performing Arts from March 11-29, directed by Arianna Bardesono. Continuing their mandate to encourage dialogue, the company will hold post-show talkbacks on March 16, 22, 24 and 29. An ongoing, evolving art display by marginalized artists will be in the lobby complementing the production. Mature content—ages 13+.

Counter Offence is a collision of virtues. Shazia, an Indo-Québecoise woman with traditional Muslim parents, is in an abusive relationship with her husband Shapoor, an Iranian facing immigration issues. What happens when the fight against racism comes into conflict with the struggle to end violence against women? Working backwards through flashbacks, the intersection of the two is explored, examining the consequences of gender versus race and skin-colour; forcing us to question our own prejudices and motivations.

From playwright Rahul Varma: “Whenever I spoke to peers about the play’s themes, their usual comment was: ‘This happens a lot in your community, doesn’t it?’ From what I knew, yes it did. But I was surprised they didn’t ask the same question of themselves. According to available statistics and cultural evidence, spousal abuse occurs in the white community just as it does in the South Asian community, and perhaps more often. I was perturbed by the dichotomy that Canadians perceive domestic violence as a crime if the perpetrator is a white male, but a cultural value if he is a person of colour. Throughout the writing process I was confronted with issues of race, multiculturalism and gender. I struggled with how far a multicultural society and its laws tolerate cultural differences that could have coercive effects on women; a complicated issue which posed new questions.”
For director Arianna Bardesono, it’s disconcerting that Counter Offence is still so timely. “Twenty-five years later, issues of conjugal violence and racial profiling in the police force have far from disappeared… I’d say the play has landed in 2020 in its own time. This compelling work raises a healthy debate on the boundaries we draw around what racist behaviour might be. It points at how ‘politically correct’ can sometimes lead to ideological extremes (and who pays for it), and how we often tend to deny healthy differences,” she said, adding, “All this told through each character’s rich, truthful contradiction.”

Counter Offence “is about violence, from the domestic to the systemic, the intimate to the institutional,” says Amir Sám Nakhjavani (Shapoor). He continues, “The play also presents a critical view of our criminal and immigration systems. Without being an apologist for crime, the helplessness and despair that individuals experience at the inhumaneness of the state is distilled through the funnel of individual action and often manifests as brutality towards others. We have to reassess how we respond to that as a society.” For Alida Esmail (Shazia) the stage is an important mirror for exploring complex social realities, and Counter Offence does exactly that. “People should see this play to open a dialogue with a larger group of people. They should come if the description of the play makes them uncomfortable, unconcerned and/or excited,” said Esmail.

Pay-It-Forward: Purchase a Counter Offence 'suspended ticket' which goes directly to a member of a community organization, giving the gift of theatre to someone who cannot otherwise afford it.

A reel of previous productions: