9to5
The Story of a Movement

Directed and Produced by Academy Award-Winners Julia Reichert & Steven Bognar (AMERICAN FACTORY)
WORLD PREMIERE, JUNE 19, 2020 AT AFI DOCS 2020
• Check out AFI Docs 2020 June 17 to 21
In the early 1970s, a group of secretaries in Boston decided that they had suffered in silence long enough. Inspired by the Women's Liberation Movement, they started fighting back, banding together to force changes in their workplaces. 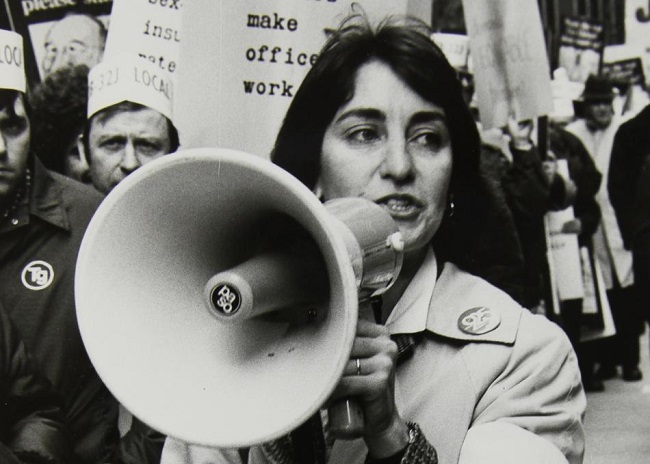 Their goals were simple: better pay, job descriptions, respect, advancement opportunities, and an end to sexual harassment - then a freshly coined concept. They employed outrageous humor to attract the press and shame their bosses into change.
This movement, taking the name 9to5, became national, and inspired Dolly Parton's iconic song and Jane Fonda's hit film of the same name.
Later becoming a formal union, 9to5 encapsulated a unique intersection of the women's and labor movements. The awareness these women brought to bear on their work reverberates even today.
Clerical workers were the low-wage workers of their era, and as America confronts the growing reality of deep income inequality, and commonplace sexual harassment, the stories and strategies of these bold, creative women continue to resonate deeply.
From the Oscar winning directors of AMERICAN FACTORY, featuring interviews with 9to5 founders Ellen Cassedy and Karen Nussbaum, 9to5 member and ex-Chair of the SF Democratic Party Mary Jung, actress/activist Jane Fonda and others; 9TO5: THE STORY OF A MOVEMENT is the untold story of their fight.
DIRECTOR’S STATEMENT
As this film enters the world, millions of - mostly young - people are in the streets, demanding fundamental change to our society. As an older filmmaker and activist I am so glad to see it. It’s my belief that while every movement for social justice has its own character, its own goals and its own tactics, every moment builds on earlier ones. The 9to5 movement took inspiration and strategy from the Civil Rights, Anti-war and Women’s Liberation Movements. But they made it their own, responding to their time, their community, and the specifics of their fight. In making 9TO5: THE STORY OF A MOVEMENT, our team wanted to highlight the tactics of a movement that demanded social change and a fundamental shift in consciousness in how our society views and treats half its members – women.
Julia Reichert & Steven Bognar's Academy Award winning doc, American Factory
documentary film documentary filmmaker film festival indie film