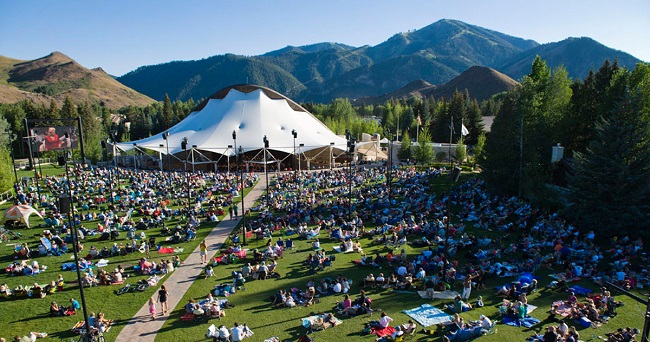 Local and federal regulations permitting, these digital events will also be projected for viewers on the Lawn of the Sun Valley Pavilion, allowing audiences in Sun Valley to enjoy each concert outdoors with appropriate social distancing. For more information on viewing from the Lawn, visit SVMusicFestival.org/Attending2020.
Music Director Alasdair Neale said:

“This Summer Season is designed, first and foremast, as a big virtual bear hug to the community, which has supported us for over 35 years. We want to give back to everyone who has invited us into their homes by inviting them into our homes and our lives. We also see this as a unique opportunity to share the Festival experience with viewers around the world. Our mission is to enrich, inspire, and instill in our community a lifelong love of classical music through extraordinary, free concerts and education programs, and this year, that mission goes online!”

Since 1985, the Festival has brought together world-class musicians from distinguished orchestras across North America to perform three weeks of chamber and orchestral concerts free to the public each summer in the scenic, Rocky Mountain resort city of Sun Valley, Idaho. The transformation of the upcoming Summer Season into a free, online festival will allow musicians to make music, faculty to teach, students to learn, and audiences to enjoy music from anywhere, all while following local and national safety guidelines and practices.
The Festival is working with more than 100 sound and video professionals nationwide to record this summer’s 14 concert programs, which will feature a varied repertoire—from solo compositions by Debussy and Missy Mazzoli, to chamber works by Brahms and Osvaldo Golijov, to orchestral music by Beethoven, Tchaikovsky, and Mason Bates. Key elements of the original Summer Season lineup will be preserved, including event dates and times, which are identical to those previously announced as main-stage, evening concerts at the Sun Valley Pavilion.
These concerts will feature all previously announced guest artists, with violinist Leila Josefowicz performing music by Esa-Pekka Salonen, pianist Daniil Trifonov giving a solo recital of Beethoven and Mussorgsky, pianist Orion Weiss appearing on several programs as both a solo and chamber artist, and ensembles Time for Three and the Villalobos Brothers performing in the Festival’s Pops Concert. Newly announced guest artists include the genre-defying acoustic quartet The 442s, which also performs on the Pops Concert, and composer Mason Bates, who performs the electronics part in his orchestral work Mothership.
A recurring theme throughout the summer will be the music of Beethoven, in keeping with the planned Beethoven @ 250 celebration. Beethoven scholar Jan Swafford, who had been scheduled as a guest speaker at the Festival, will now provide musical commentary to online audiences. The Festival’s annual Gala concert—featuring Broadway stars Audra McDonald, Kelli O’Hara, and Brian Stokes Mitchell—will also take place virtually. For years, this has been the only event for which the Festival charges admission, but this summer, as a gift back to the community, the Festival presents the concert free of charge on Monday, August 3.

To create the 2020 Summer Season, the Festival is recording Orchestra members and guest artists at halls, schools, and homes in cities across North America, including Chicago, Cleveland, Denver, Houston, Milwaukee, Minneapolis, New York, Rochester, San Francisco, St. Louis, and Toronto. Programs will include single-location, socially distanced performances; multi-location, video-synced performances; and performances that include elements of both, as in the case of orchestral works, which will feature musicians conducted in person by Alasdair Neale as well as orchestra members performing their parts remotely. Programs will also feature commentary from Mr. Neale, as well as his conversations with guest artists and Orchestra musicians.
About the Sun Valley Music Festival
The Sun Valley Music Festival was founded by Carl and Julianne Eberl in 1985 on a mission to inspire the Sun Valley, Idaho community and instill a lifelong love of classical music through admission-free concerts and tuition-free educational programming. The Festival Orchestra has grown from 20 members at its founding, to now more than 100 musicians from North America’s most distinguished ensembles, making it the largest, privately funded orchestra devoted exclusively to free performances.
Orchestra members hail from more than 45 different ensembles and institutions, including the Chicago, Cincinnati, Dallas, Detroit, Pittsburgh, San Francisco, St. Louis, and Toronto Symphonies; the Cleveland, Louisville, and Minnesota Orchestras; and the Chicago Lyric, Dallas, Houston Grand, and Washington National Opera Orchestras; among many other ensembles.
classical music classical music festival music festival