Batuki Music Society is proud to present the seventh edition of the Habari Africa Festival with online concert presentations that celebrate the uniqueness, wealth and diversity of African music featuring a stellar line-up of national and international artists. 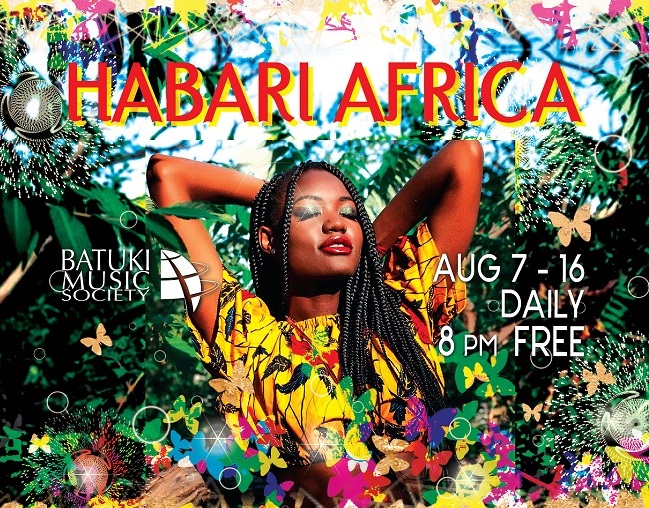 Join us online and subscribe to the Batuki Music YouTube Channel to watch the Habari Africa Virtual Festival daily performances at 8 PM from August 7 – 16th, 2020. 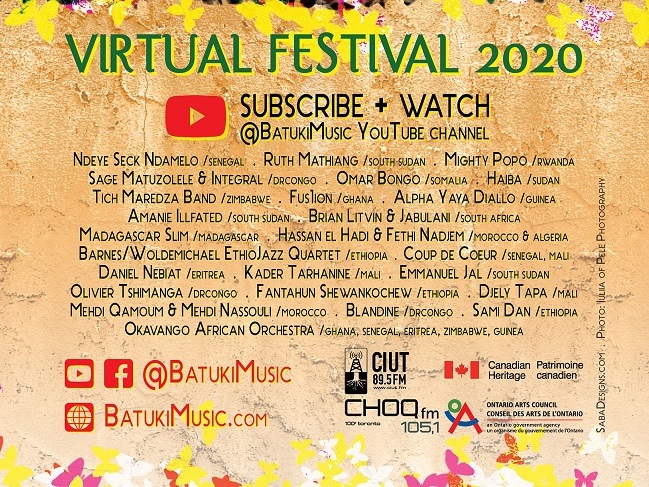 Alpha Yaya Diallo is a multiple award-winning guitarist and singer from Conakry, Guinea. His dexterous guitar style, with its fluid melodic lines and compelling grooves, places him in the front ranks of African axe-men.
Blandine is a talented singer/songwriter from the Democratic Republic of Congo. Her music encompasses traditional Congolese rumba, soukous, mutuashi, jazz, Afropop and Afrobeat.
As much as Mighty Popo inherited a love of the traditional music of Rwanda and Burundi, he also has a lifelong connection with rock, blues, jazz, R&B, reggae and folk traditions.
Descendant of a line of griots, Malian singer-songwriter Djely Tapa presents a musical style oscillating between blues, electro and Sahelian atmospheres. 2020 JUNO Award winner for World Music Album.
Ethiopian singer, songwriter and performer Sami Dan defines new school reggae with catchy melodies and authentic beats.
From his start in life as a child soldier in the war-torn region of Southern Sudan, Emmanuel Jal has come through a huge number of struggles during his life to become an acclaimed recording artist and peace ambassador.
Through his innovative guitar style, which he calls "Tshimangology”, Olivier Tshimanga has opened up new possibilities for the modern Congolese rumba guitar and has had a profound influence on the current generation of guitar players.
Okavango African Orchestra brings together music and instruments of several African cultures to create a new music, harmonizing different tunings, rhythms and timbres.
Canadian drummer Daniel Barnes and Ethiopian saxophonist Girma Woldemichael perform original music of diverse cultural origins alongside Ethio-jazz classics for a potent world jazz experience.
Ruth Mathiang is a singer-songwriter with a melodic sound described as a "mixture of traditional African music with hip hop, Afrobeat, jazz and reggae inspired."
Daniel Nebiat is an Eritrean-Canadian musician, who sings and plays the krar – a traditional stringed instrument similar to the harp, tuned to a pentatonic scale.
Hassan El Hadi is a Moroccan-born singer-songwriter, oud and banjo player, performing with Persian percussionist Naghmeh Farahmand and Algerian violinist Fethi Nadjem.
Tich Maredza Band is an acoustic guitar-based fusion of Zimbabwean traditional and contemporary rhythms with members Tich Maredza, Larry Lewis, Gordin Mapika and Tich Gombiro.
Malagasy-Canadian guitarist Madagascar Slim combines folk, blues, and Madagascar’s salegy music tradition in his own award-winning style.
Brian Litvin brings his homegrown blend of Zulu folk music, township jive and Cape Town jazz to audiences across Canada, together with his band Jabulani.
Born in Niger, to Malian parents, Kader Tarhanine music blends traditional rhythms with rock tonalities and lyrics inspired by Sahelian and Arabic poetry.
Abdel Wahab a.ka. Haiba is an accomplished oud player, singer and composer from El Obeid city in Western Sudan. His trio features percussionist Tarig Shanga and accordionist Misara Gandi.
Fantahun Shewankochew is an acoustic krar player, multi-instrumentalist, composer, arranger and vocalist with a background in the professional arts community.
Amanie Illfated is a South Sudanese born singer, songwriter and model, whose music is a dynamic fusion of R&B, Reggae, Afrobeat and Trap.
A guitar player by trade, Omar Bongo spent his youth playing funk and reggae in the nightclubs of Mogadishu. It was on his move to Toronto, Canada in the late 1990’s that he was drawn to the traditional sounds of the kaban (oud).
Gnawa musician and composer Mehdi Qamoum, has mastered several folk instruments including guembri, outar, karbaou, bendir and a custom guembri four-string electric bass. Mehdi Nassouli is a guembri player whose passion for Moroccan music is matched by his engaging stage presence. His music is a mix of Amazigh and Gnawa music with sounds of the wider world.
We are grateful for the support that we have received from the Ontario Arts Council, Canadian Heritage, CIUT 89.5 FM and CHOQ FM, as well as the community support, artists and audiences that have taken part in our programs.
Habari Africa Virtual Festival 2020
Friday August 7th - 16th
Subscribe online: https://www.youtube.com/user/BatukiMusic
Facebook Event: https://www.facebook.com/events/1025086214577004/
Info: http://batukimusic.com/site2/
african music african music in toronto