Flowers for Dystopia, by New York City based Les Techno, is full of stick-in-your-head hooks and enigmatic lyrics. Les Techno blends genres, electronics and live instrumentals for a sound that's thoroughly contemporary - albeit with a tip of the hat to the past. 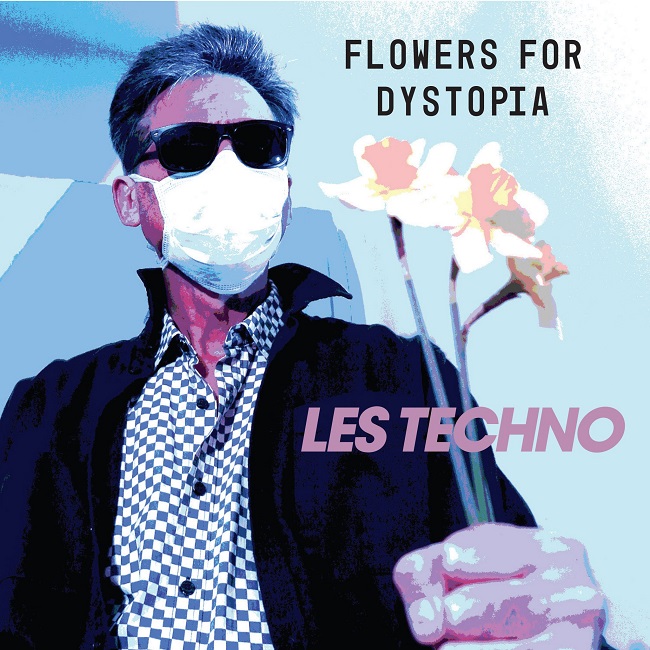 Techno has a great feel for songwriting in a nutshell, with all the tracks coming in at under 4 minutes. He lists Bowie, Psychedelic Furs and others as influences in his media, but I'm hearing 1970s era radio pop as well - with a modern electronic edge - and tracks like Come Along are reminiscent of Freddie Goes To Hollywood's iconic dance track, Relax, Don't Do It.

He calls himself a post-punk electronic rocker, and blends rock guitar sounds, electronics, hip hop beats, and live bass. He talked about the title track in a media release.

"This song came in a dream. I dreamt the live band was on stage at some dingy east village club, and I walked onto the stage, came to the mic and announced "Objects!... Objects!... Objects!" and then I heard the underlying guitar riff that starts the song."

Edge of the World fuses synth pop and guitar-heavy dance rock. Is It Real is a stand out track, with an interesting rhythm and chord changes, and eerily reverbed vocals that add an angsty dimension.

Along with his work as a musician, Les is a studio veteran who has worked on creating tracks and mixes for industry greats in a variety of genres from Run-DMC (Profile) and Mobb Deep (Loud/RCA), to Georgie Blacks ("Kickup Unwine", RCA), and dance remixes for Red Hot Chili Peppers ("Higher Ground").

Les on What ya Done:

"This one started as the music in the chorus, the chords,  vocal melody and the synth line going around my head while I was standing at a bus stop.  So I ducked into a doorway and sang the parts into my phone and the track came together. The lyrics came after that after reading about how young billionaires prepare for Armageddon. You'd think they would spend their money preventing it, right ?  The guitar lead was simply a late-night visitation from the spirits. Maybe the best 5 notes I've ever played."