After violent attacks and amidst Asian Pacific American Heritage Month, a new report from the Annenberg Inclusion Initiative reveals how film portrayals of the API community are limited.

LOS ANGELES — May 18, 2021. In the wake of ongoing violence, discrimination, and hate toward the Asian American and Pacific Islander community, a new report reveals how popular films perpetuate erasure and stereotyping of this group, a state of affairs that can lead to discrimination and psychological harm.

The first-ever report is a result of a collaboration between Dr. Nancy Wang Yuen, Dr. Stacy L. Smith and the USC Annenberg Inclusion Initiative, with funding from Amazon Studios and UTA Foundation. The study includes an assessment of Asian and Pacific Islander (API) leads and speaking characters across 1,300 top-grossing films from 2007 to 2019. The report also includes a qualitative analysis of primary and secondary API characters from 2019’s most popular movies.

The report is the latest from the Annenberg Inclusion Initiative and can be found online here. Results from the study, along with other research conducted by Dr. Nancy Wang Yuen will be shared at Amazon Studios event VOICES: API Representation in Film & Media on May 20th. The virtual event features special guests Daniel Dae Kim, Nina Yang Bongiovi, Stephanie Hsu & Sophia Ali.

Across 51,159 speaking characters in 1,300 top-grossing movies, 5.9% were API. This percentage did not meaningfully differ by year, and falls short of the 7.1% of the U.S. population that identifies as API. Additionally, a closer look at films from 2019 demonstrates that under-representation is only one facet of the bias facing the API community in film. 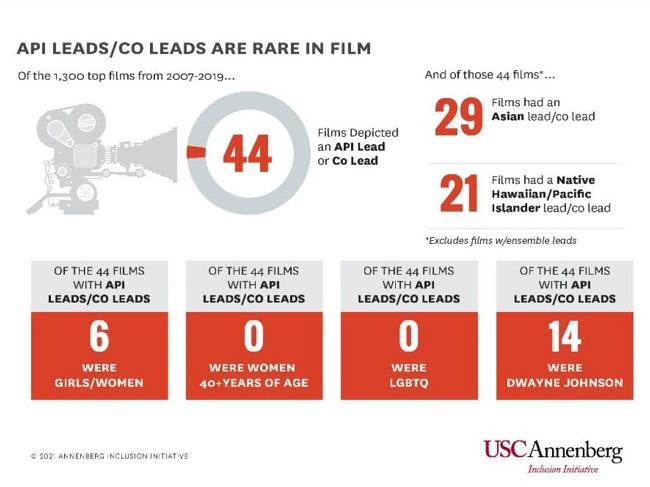 “People often ask me whether representations of Asian Americans and Pacific Islanders are improving,” said Dr. Yuen. “Unfortunately, when representation looks like tokenism, Hollywood is doing the bare minimum for inclusion. In 2019, 30% of API primary and secondary characters were either one of the only, or interacted with no other API characters on screen. We need to see more than one API character on screen interacting with one another in meaningful ways.”

The report reveals that two-thirds (67.4%) of the 1,300 films studied fell below proportional representation of the API community. Further, 39% of all movies failed to depict even one API character. When Asian and Pacific Islander communities were examined separately, 40.2% of films were missing even one Asian character and 94.2% did not include even one Pacific Islander.

Only 44 or 3.4% of all 1,300 films had an API lead/co lead across 13 years, with only 6 movies featuring an API woman in a lead/co lead role. This translated into only 22 individual API actors and only 4 API women. In comparison, 336 individual white male actors were in leading/co leading roles across the same 13-year time frame. The voices of API characters are not only missing in leading roles—across 200 top-grossing films from 2018 and 2019, 74.7% of tertiary or minor API characters spoke 5 lines or less of dialogue. 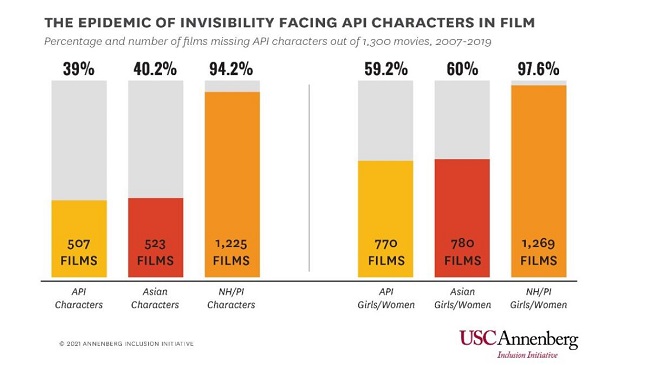 “These findings offer more evidence that the epidemic of invisibility continues to persist and with serious consequences,” said Dr. Smith. “Mass media is one factor that can contribute to aggression towards this community. When portrayals erase, dehumanize, or otherwise demean the API community, the consequences can be dire. Without intention and intervention, the trends we observed will continue.”

API portrayals are skewed in other ways. The report details the results of a qualitative analysis of 79 primary and secondary API characters across the top films of 2019. Portrayals of the API community range from invisible to fully human, with most portrayals falling into the categories of silenced, stereotyped, tokenized, isolated, and sidekicks/villains. The stereotypes still present in top films include the persistent emasculation of API men—58% were shown with no romantic partners compared to 37.5% of API women without partners—as well as that of the perpetual foreigner, evidenced by non-U.S. accents and use of non-English language. Most troubling, portrayals of API characters still include violence, death, and disparagement. 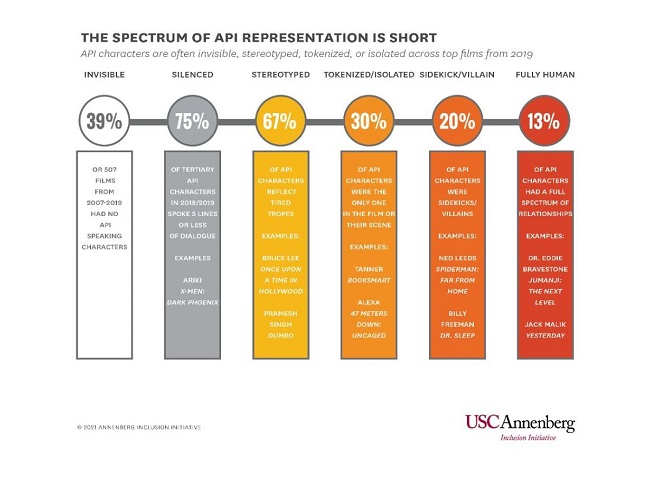 “With the rise of anti-AAPI violence in the United States, on-screen deaths of Asians and Pacific Islander characters are particularly jarring,” said Dr. Yuen. “In the top 100 films of 2019, just over a quarter of Asian and Pacific Islander characters die by the end of the film and all but one death ended violently. This, along with 41.8 percent of API characters receiving on-screen disparagement--some of which are racial slurs--films can fuel anti-AAPI hate. With over 6,603 hate incidents reported to Stop AAPI Hate from March 19, 2020 to March 31, 2021, Hollywood needs to take responsibility for problematic representations of Asians and Pacific Islanders.”

“Not one API woman has received sole directing credit for a live action top-grossing feature film in the last 13 years,” said Dr. Smith. “Inclusion of the API community thus far has been little more than lip service. Opening up opportunity behind the camera for the API community and in particular, API women, is essential to seeing more authentic, humanized portrayals on screen.”

“In order to reconcile past harm, invisibility, and stereotypes on screen, we first need to confront the hard truths and data,” said Amazon Studios Global Head of Diversity, Equity, & Inclusion, Latasha Gillespie. “This study is an opportunity for all content creators and media companies to examine and root cause decisions that contributed to our current state, but more importantly drive ongoing accountability in our work.” 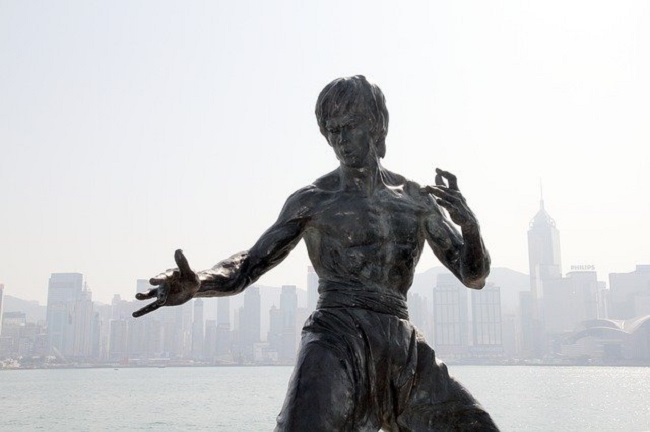 “The numbers speak for themselves - again. They are a sobering look at how far the industry still has to go to counter the invisibility of our community onscreen. If anything is to improve, the historic indifference on the part of decision makers toward increased Asian American representation must go beyond the usual performative rhetoric to actual, demonstrable change.” said Daniel Dae Kim, Actor and Producer.

“One year ago, our community was erroneously blamed for a global pandemic. Now, we see violence against and hatred of AAPI's reaching unprecedented levels. The words we use, the stories we tell, how we portray people matters. The creative community is uniquely positioned to tell more authentic and inclusive stories that diverse audiences yearn to hear. This effort to document the quantity and quality of AAPI portrayals is an essential starting point for lasting progress in how our community is represented in the mainstream,” said UTA partner and TV literary agent David Park.

About USC Annenberg Inclusion Initiative
Launched more than 10 years ago by Founder Dr. Stacy L. Smith, the Initiative is globally recognized for its valuable and sought-after research solutions to advance equality in entertainment. Dr. Smith and the Annenberg Inclusion Initiative examine gender, race/ethnicity, LGBT status, disability, and age on screen and gender and race/ethnicity behind the camera in cinematic and television content as well as barriers and opportunities facing women and people of color in the entertainment industry. To learn more, visit http://annenberg.usc.edu/aii or follow on Twitter, Instagram, or on Facebook.

From Justin Lin's 'Finishing The Game'