Emmys For Whales:
Carleton Scientist in Residence Shane Gero & Secrets of the Whales

It was a late-night text that let biologist and Carleton Scientist in Residence Shane Gero know his work had garnered Hollywood accolades. Secrets of the Whales took home this year’s Emmy for Outstanding Documentary or Nonfiction Series and much of the series’ subject matter comes from Gero’s research on whale culture and social structures.

Gero has been researching whales for over a decade and has a particular interest in exploring the culture and social structures of whale families. About four years ago, a photographer with National Geographic wanted to capture Gero’s novel work with families of sperm whales off the coast of Dominica, in the eastern Caribbean Sea.

“We wanted to shift the perception about whales, to see them as complex creatures with differences owing to genetics, but also to culture,” says Gero. 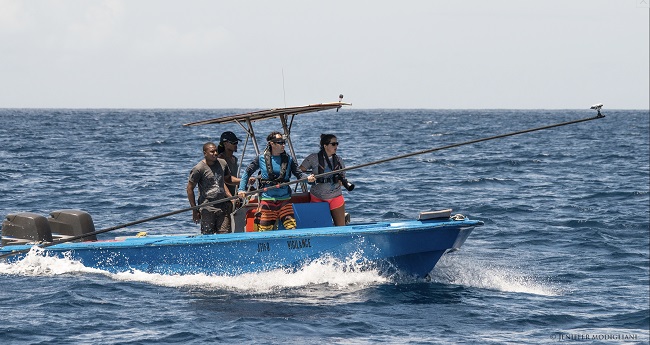 Not only was National Geographic interested in telling a broader story, so was Disney+ and from there Gero’s involvement in the project snowballed. The Secrets of the Whales series took three years to produce and involved filming a variety of species in dozens of locations around the world. Gero was involved in almost every aspect.

Gero provided scientific consultation on the series, but also oversaw footage and edited scripts that would be voiced by actor Sigourney Weaver. Gero credits the series producers with being open to telling the real story of the whale families and what it means in terms of how we protect them.

“It has been good training as a scientist to figure out how to craft research to be ingested by all sorts of different audiences,” Gero says. “I’ve always had the mindset that if science isn’t communicated, then what is it for?”

The Disney+ series is executive produced by James Cameron, and narrated by Sigourney Weaver.