Spring performances will include: 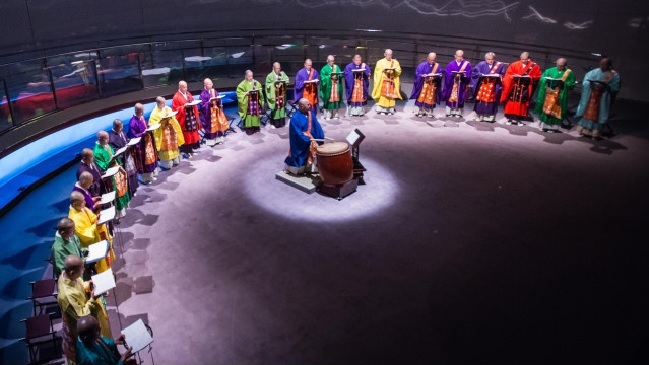 Believed to have originated in India, shomyo is a ritual form of Buddhist chant that traveled along the Silk Road to China, eventually reaching Japan in the sixth century. The ethereal voices of Shomyo no Kai—Voices of a Thousand Years, a group of priests from two of Japan’s major Esoteric Buddhist sects (Shingon and Tendai), have enraptured audiences around the world with their ecstatic monophony. Inspired by Navajo folktales and ancient Buddhist mandalas, young, female composer Yu Kuwabara presents a new shomyo piece written in the traditional style, entitled "Spiral Mandala Ceremony." Clad in brightly-colored monastic robes, the choir’s powerful chanting transports the audience to a transcendent meditative state within the exceptional acoustics of St. Bartholomew’s Church.

Commemorating the 50th anniversary of Okinawa’s return to Japan after the U.S.'s post-WWII occupation, a group of the islands' most exquisite dancers will perform a diverse repertoire of Okinawan traditional performing arts accompanied by live music. As specially selected by the young artistic director of the National Theatre Okinawa Michihiko Kakazu, the versatile artists will perform highlights from the traditional repertoire of kumiodori, a noh-inspired theater form developed during the period when the archipelago was an independent kingdom called Ryukyu (15th-19th centuries). The program also features popular folk dances (zo odori) with traditional ensemble music. From the brightly-dyed bingata costumes to the island music's iconic use of pentatonic scales, audiences are invited to relish the history and heritage of Japan's southernmost prefecture.

A similar performance from 2015:

OKI: Music of the Ainu
First Week of May - Exact Date TBA

Oki Kano, known professionally as OKI, is a leading musician of Ainu music—the music of Japan’s northernmost indigenous people. Born to a Japanese mother and an Ainu father, OKI has recovered and recreated traditional music on the tonkori, a stringed instrument of the Ainu people of Karafuto (a region also known as Sakhalin). The rich, reverberating twang of the tonkori strings, which are traditionally made from deer tendons, allowed Ainu shamans to communicate with spirits that control the wind, rain and other natural phenomena called kamuy. In this program, OKI performs solo pieces as well as contemporary works, performed by his internationally-known Oki Ainu Dub Band, that fuse Reggae, African and Electronica with Ainu folk melodies. OKI is featured in the film Ainu Mosir (2020), currently streaming on Netflix.
Japanese arts japanese culture