Sabertooth Swing to release ambitious “Delta Bound”,  a meditation on the violent history and complex culture out of which jazz first emerged. 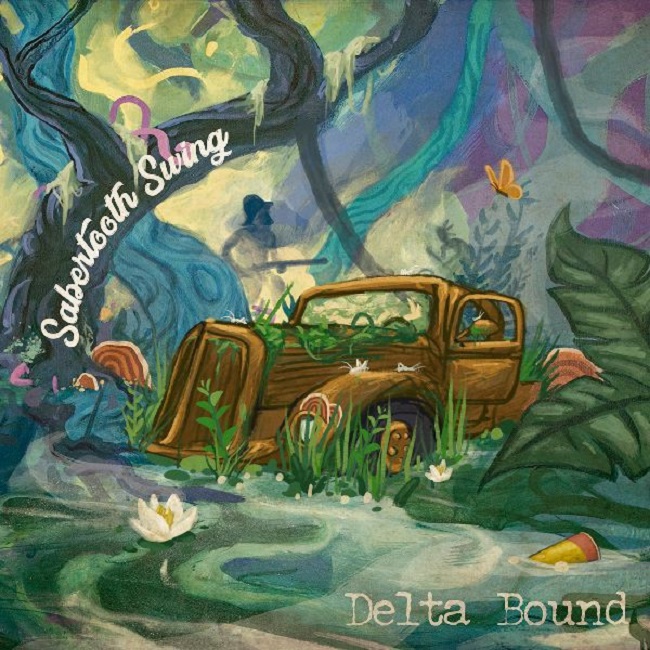 These are the questions being asked on New Orleans-based Sabertooth Swing Band’s upcoming Delta Bound (March 18, 2022, Slammin’ Media), an ambitious album that brings together the work of poets, activists, and historical figures to become a meditation on the violent history and complex culture out of which jazz first emerged.

“In New Orleans, memories linger in the humid air. But not all memories hanging in the air are benign.”

History is felt here; it’s close to everything you look at. The histories recorded in the archives of institutions and written by figures of authority always have a shadow, and so often it’s a shadow of violence. Delta Bound’s look into the cultural wealth of New Orleans is a one of a kind collection that doesn’t pull any punches.

It invites the shadow of violence in and insists that the cultural wealth would not exist without it. As writer and liner note contributor Holly Devon asserts, “What’s so important about this album is that it’s showing the continuity of the story of New Orleans. There are all these different time periods that are filtering through, but the place is the constant that binds it all together. It’s the making of the reality that we’re all living through in New Orleans right now. And there’s been no break. Delta Bound asks, ‘Can we all face this violent history and can we all face the truth of it?’ With the power of art, you get a chance to actually touch the depths of this music and you can’t do that if you’re not willing to face that reality.”

After a brief spoken introduction from Devon that sets the premise of the trip we’re about to embark on, we’re invited into history by Dan Ruch growling out a brooding version of Alex Hill’s “Delta Bound”. The album’s focus track, Sabertooth’s version starts out with a trumpet shout into a chromatically descending line that sets the mood for Ruch’s sardonic, gravelly delivery of the desire to get back to the Delta “where there’s no shelter, no helter skelter”.

And as soon as we get there, the history sets upon us. 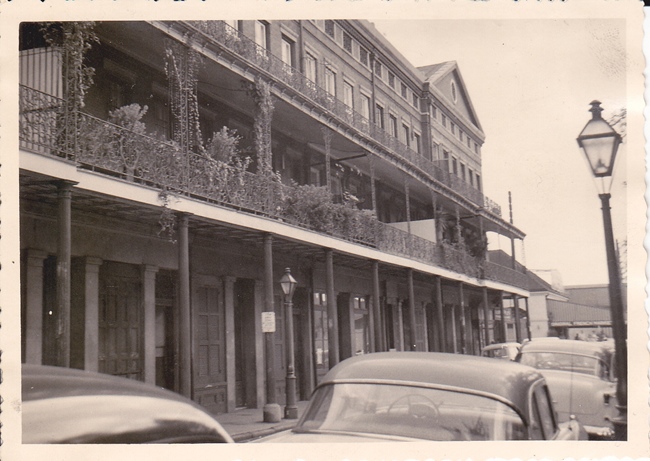 As the first source of documentary evidence of the Lower Mississippi Valley, the 16th Century de Soto expedition offers a window into the world of indigenous Louisiana, albeit through severely prejudiced colonial lenses, and is therefore a kind of historical ground zero for Louisiana as we know it.

Hernando de Soto was a Spanish explorer who, in the 1540s, made the first contacts with the indigenous peoples of the Southeastern region of America — encounters that always wound up with the Europeans visiting unspeakable brutality and violence on the people they found already living there.

Set to a bouncing shuffle, Armando Leduc-Cruz’s reading of Luis Hernandez de Biedma’s original account of de Soto’s meeting with Chief Tuscaloosa and the resulting massacre of the inhabitants of Mobila on “De Soto Pt 1” sets up the arc of the narrative of the shadow of violence.

It’s a brutal accounting of the atrocities, putting us face-to-face with the violent history of this land.

Romain Beauxis of Sabertooth Swing Band, the originator of the concept of Delta Bound, wanted to make sure to include the de Soto history. “I’ve been in the New Orleans region for over 10 years, and I love it.” Beauxis explains. “But I want to face all the dark elements of it. “De Soto Pt 1” is the opening of the whole arc of violence that that has always been a background, a backdrop, for a lot of histories. Sister Helen Prejean says, ‘We’re a very young country and violence has worked for us in the past.’ And it started with the genocide of Native Americans. De Soto is here to represent that part of the story.”

The death penalty and racism

At roughly the halfway mark of Delta Bound, Sister Helen Prejean herself ties de Soto directly to the present day by reading her 1997 letter to Pope John Paul II. After thanking the Pontiff for speaking out against the death penalty, Sister Helen goes on to call out former New Orleans District Attorney Harry Connick Sr. for stating that, in his view, the application of the death penalty is “all too rare”.

She points out the stark reality of the discrepancy between punishments for the same crime: “In the decision to seek death as a punishment, the vast majority of people on death row, 85%, are chosen for death because they killed white people.” Prejean notes. “Whereas, when people of color are killed - fully 50% of all homicides - not only is the death penalty seldom sought but often there is not even vigorous prosecution of such cases.”

One might conclude that when the District Attorney for the City of New Orleans doesn’t think we use the death penalty enough against our poor citizens - and 99% of the souls on death row are poor - maybe we’re not so far from de Soto trying to eradicate every Indigenous person he encountered. 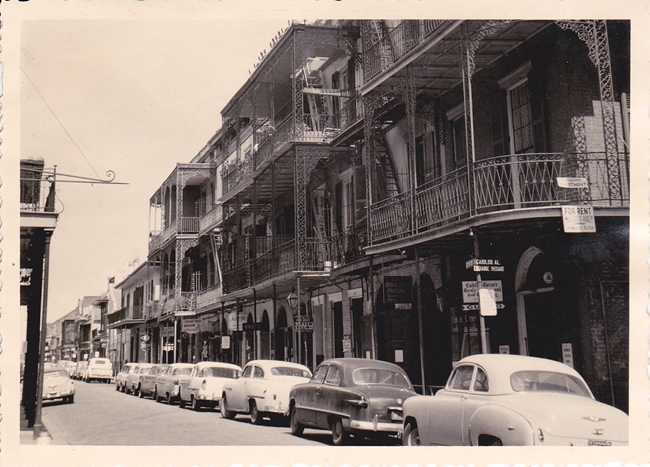 Different threads of New Orleans and Louisiana history are explored on Delta Bound through the inclusion of poems like “St Malo”, which Cedric Watson reads in the original French Creole to represent the Haitians who settled in southern Louisiana after the Haitian revolution.

Another standout reading is Jeremy Thomas’s reading of “Free Day”, Sidney Bechet’s recollection about the music played by slaves in Congo Square on Sundays, that speaks from inside the memory of Africa itself.

Bringing the histories of the Haitian and African progenitors of Zydeco tradition into the mix is Clifton Chenier’s “I’m On the Wonder” (single, out Feb 18), sung here by Zydeco accordionist and fiddle player Jeffrey Broussard.

Zydeco combines European, African, and Caribbean musical traditions with syncopated rhythms, and Sabertooth takes it even further afield for Delta Bound with the addition of pianist Ryan Hanseler, who contributes gutbucket stylings to the down and dirty blues accordion Broussard brings to the mix. If New Orleans music is a gumbo, “I’m On the Wonder” is a trusted family recipe. 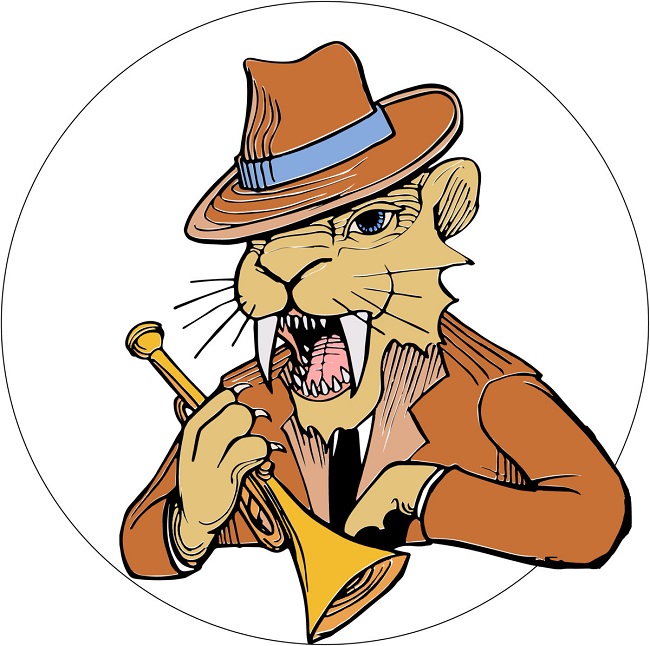 Although Delta Bound deals with difficult themes, it is not without rays of hope peeping through the cracks. Halfway through our journey, we are reminded by “Joie de Vivre” how Zachary Richards’ grandparents were able to channel happiness dancing in their kitchen on a Sunday afternoon.

The flip slide of the shadow is the joy and warmth found in the South, and Sabertooth Swing reminds us that if one gives people a chance, change and understanding can happen. Sister Helen Prejean herself tells the Pope that despite all the difficult matters that she has witnessed “I am full of hope. I have found that when people can get real information about the death penalty, not just rhetoric from politicians or sound bites from media, overwhelmingly, they reject the death penalty and choose life.”

Delta Bound will be released March 18 in digital, CD, and vinyl formats on Slammin’ Media/Believe Digital.