Eric Anders and Mark O'Bitz explore the rich possibilities of the acoustic duo in their latest release, Variant Blues. It's their third.

Anders' expressive tenor and simple instrumentation flesh out stories about the state of the world, accompanied by musicianship that has polish - but not so much polish that it interferes with expression.

It's part of their four-part "Music in the Time of Coronavirus" series.

Speaking on their two most recent releases, "Stuck Inside" and "Variant Blues", Eric Anders says "Both albums are full of songs that try to capture something about these times of a global pandemic, climate change, and the rise of new forms of very old right-wing ideologies.  Some through references to history, some with references to the poet Emily Dickinson, and others that are more directly about these troubled times we live in."

"We had hoped to go into the studio to finish these albums during the spring and summer of 2021, but the Delta variant kept us all at home.  These two albums were done almost completely remotely--90% remotely--with regard to the three principles: me, Mark O'Bitz, and Mike Butler, our producer."

We'll Get There Soon is a standout track, exemplifying the duo's strong songwriting chops. It has a laidback groove you'll find yourself bopping to, with a melody that will stick in your head. 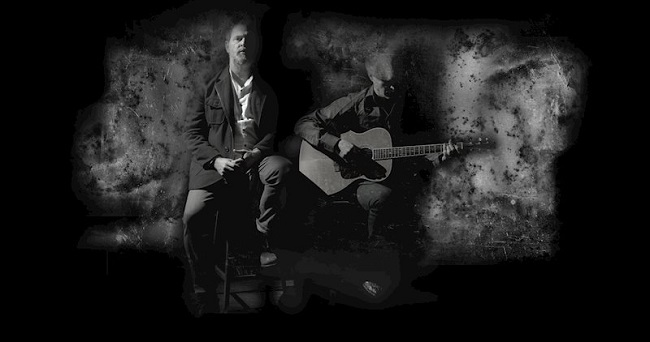 Bang Goes The Gun is another memorable song, an emotional ballad with a spare instrumentation - strummed guitar, and lonely harmonica and slide guitar lines that weave in and out of the melody.

You may find yourself thinking of Tod Rundgren and similar songwriters and singers. In Just A Game, they need only vocals, acoustic guitar, and a mournful cello to convey the mood.

The lyrics cover the vagaries of love and the frustrations of society with an equal attention to the poetry. Tired Love talks about what happens when the fire of lust turns to everyday love.

Now I'm with you everyday now,
And the kids sometimes they fight
So there's really nothing wrong you see,
Nothing I see...

Track List: Far Gone; Oh to Leave Here; We'll Get There Soon; Err on the Side of Love; Bang Goes the Gun; Beyond Silence; Just a Game; Dusk Comes Too Soon; Tired Love; Lopsided Gyre (Revisited)