Transparent is the preview release for the eponymous upcoming album by Galactic Fuzz. It's an alt-rock track with an instantly recognizable feel, driven by insistent guitar rhythms.

The verse has an earworm groove, but then takes a detour into the interesting rhythms and contrapuntal vocal lines of the chorus. It's alt-rock with an intellectual approach to the music that adds intriguing texture.

My one quibble would be that the vocals could come up louder in the mix - the lyrics sound interesting... I think, and those great vocal effects are somewhat muted. 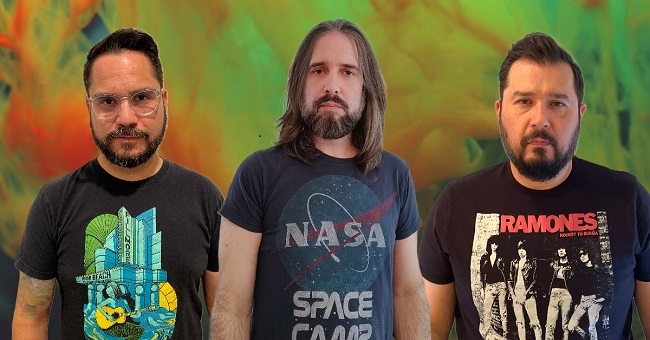 Vocalist/guitarist and songwriter Javier Guell says in a media release, "I've always loved singing, but had mostly been a backup singer and lead guitar player in all my bands. The inception for Galactic Fuzz was my decision to sing my own songs for a change, as I had always written for others to sing.

The name of the band comes from my fascination with Science Fiction works by the likes of Isaac Asimov, Arthur C Clarke, and Frederik Pohl, and some of our sounds and lyrics influenced by that even if not apparent at the surface.

You can call us an Alternative Rock band but it's an oversimplification of the truth. We all have varying influences. Our drummer Ricky comes from a school of punk bands but also plays blues and loves jam bands. Jorge grew up with Classic Rock and hard rock and metal from the 80s and 90s."

I'll look forward to the full release from the Miami/Las Vegas based band later next month.