The magic of great music takes place in one of the most charming cities of Umbria from December 28 to January 1. The Festival’s signature lies in the balance between culture and tourism, two crucial mosaic tiles describing the high standard of living that Orvieto and its land can offer its visitors and locals. 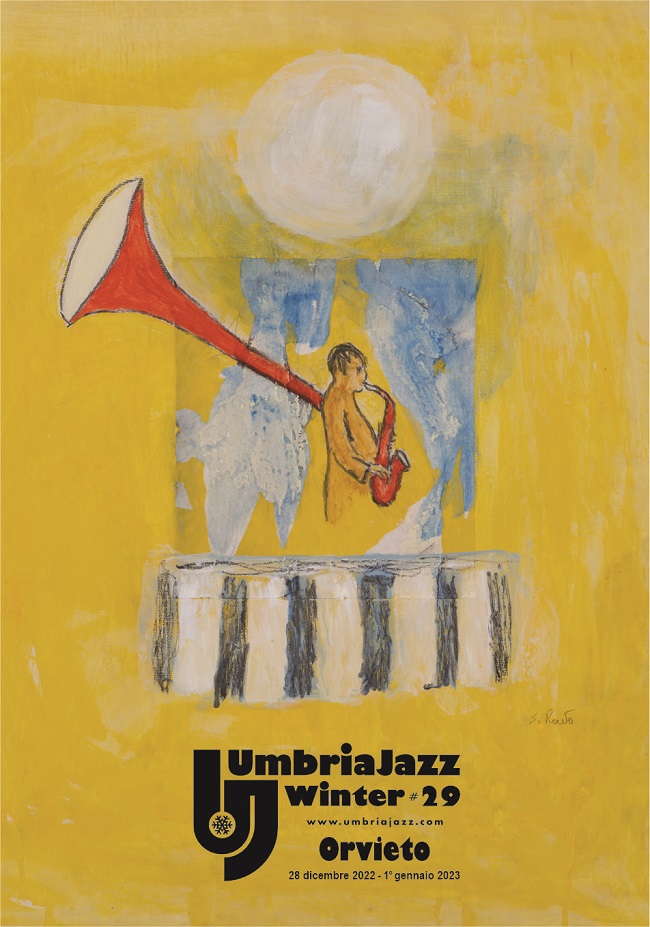 Umbria Jazz Winter is confirmed as a flagship event of the winter tourist season nationally, both for its history (2023 will be its 30th anniversary) and its formula, which lies in an attractive program and the charm and warmth (including good cuisine and noble wines) of an art city like Orvieto.

The fil rouge of this year’s program is characterized by excellent musical quality. Umbria Jazz Winter #29 can be considered a return to the first editions’ identity, with original proposals aimed at a public who wants to explore less popular – not less attractive – aspects of jazz music.

As usual, the formula includes concerts from late morning to late night in the old town of Orvieto. The fact that almost all musicians are resident artists allows people to choose a different route every day.

The concerts take place in two strategic buildings in the architectural heritage of Orvieto: the Palazzo del Capitano del Popolo, with the Sala dei 400, and the Teatro Mancinelli. Even the city center of Orvieto is an exceptional venue for Funk Off and their joyful parades. Except for last year, an event closely related to the particular time of the year is central to the program of Umbria Jazz Winter.

It is the gospel concert in the cathedral on the afternoon of New Year’s Day, the Day of Peace. After the Mass, one of the most famous choirs in the United States will sing African-American religious songs. Gospel itself is a message of peace and brotherhood and represents the deep faith of the Christian communities in America. Special events are scheduled to say goodbye to 2022 (with no regrets) and celebrate 2023, hoping for a better year. Nothing better than looking forward to it with the warmth of music and being together.

UJ4KIDS returns to Orvieto after the successful edition of 2019 at Umbria Jazz Winter and two years of a forced break due to the pandemic. On December 29, 30 and 31 (from 10 to 11.30 am), the Sala del Carmine will host activities resulting from workshops held by the Scuola Comunale di Musica “Adriano Casasole” in collaboration with the local primary schools. On the morning of December 29, there will be a symbolic changing of the guard between a young marching band – a school initiative – and Funk Off. This encounter will take place near Piazza della Repubblica.

Everything was scheduled to organize an excellent edition that acts like an ideal prologue for the 50th anniversary of the summer one and the 30th of the winter one, both planned for 2023.

THE MUSICIANS OF UMBRIA JAZZ WINTER # 29

Famous artists and young emerging talents, traditions, modern mainstream and sophisticated jazz music, music for purists and genres for all tastes: Umbria Jazz Winter is an inclusive event where everyone can find their most suitable concert. This edition is known for the excellent attention given to songs and voices.

Umbria Jazz Winter begins with the jazz of tomorrow. The first concert of the Festival – with free admission – is focused on young emerging talents: the winners of the Conad Jazz Contest 2022 (Five Angry Men), a competition that takes place every year during the summer edition, and the band including the best students of the classes and winners of the Berklee Umbria Jazz Awards.

Orchestra Nazionale Jazz Giovani Talenti conducted by Paolo Damiani can be placed within this context. This project was born to enhance some of the best new professionals on the Italian jazz scene. They are young but renowned since they won the Musica Jazz Top Jazz Awards.

Vinicio Capossela returns to Umbria Jazz: among the most original songwriters of the last decades, he presents a retrospective of his outstanding career.

Burt Bacharach’s songs find an ideal place in Dianne Reeves and in Ethan Iverson’s new arrangements: this is the most recent project involving the Umbria Jazz Orchestra. Iverson himself, with Peter Washington and Dan Weiss (the rhythm section of the tribute to Bacharach), will also perform in trio. Most demanding jazz lovers can’t miss this performance.

An audience favorite at Umbria Jazz, Allan Harris has a new story to tell through his songs. “Kate’s Soulfood” is a cross-section of America revolving around a popular luncheonette in Harlem owned by his aunt Kate.

A special chapter of the vocality is the choir conducted by Vincent Bohanan, The Sound of Victory, founded in 2014 by selecting around fifty young singers from the New York metropolitan area: this is an important professional opportunity and a witness of faith.

Umbria Jazz did not forget Charles Mingus, one of the jazz geniuses who was one of the protagonists of the first editions of the Festival. The centenary of Charles Mingus’ birth will be celebrated with a sextet of American musicians from the Mingus Big Band and Italian players Roberto Rossi and Piero Odorici.

Javier Girotto presents his new “Legacy” project and performs his compositions from some years ago but never played. He will perform with a quintet: three horns (including his saxes), bass and drums.

This pianist should be followed carefully. Kris Davis is one of the most interesting personalities among those who emerged on the jazz scene in the 21st century. Nowadays, Canadian musician Davis, who has been living in New York for 20 years, is very acclaimed in the jazz and the most innovative music scene.

Romero Lubambo’s facility, creativity and energy are in a class all their own. These are the words of the magazine “Jazziz”, but it is only one of the many testimonies of respect for the Brazilian guitarist from the music world. Lubambo is part of the project on Burt Bacharach’s songs in Orvieto since his long-time artistic partnership with Dianne Reeves, but he will also give a solo performance.

Jon Cleary, a British musician raised in the countryside of Kent, is now one of the most acclaimed interpreters of New Orleans, the city where he has been living for decades. Jon faces the genres defining New Orleans’ music identity with exceptional versatility (he also won a Grammy Award), from the traditional to the most modern ones: jazz, blues, rag, stride, gospel, funk, soul.

Here is a band that can always combine show and good music, so much so that it has become a music postcard of Umbria Jazz. Funk Off have been the most present musicians in the summer and winter editions of the Festival. Besides their usual street parades, Funk Off are scheduled to perform at midnight on New Year’s Eve in front of the parvis of the Cathedral to welcome 2023 together.