In its ten year history, the imagineNATIVE Film + Media Arts Festival has come to be a real showcase for innovative work along with yet another chance to schmooze with industry types in Toronto hotspots.

If you're a filmmaker (and an attending Festival Delegate), it offers the chance to connect with distributors and possible sources of funding with a view to fostering future partnerships. As a film and media hound, you'll get your choice of over 125 works from Indigenous artists from around the world, including Nepal, Brazil, Argentina, Australia, Germany, the United States, Russia, Finland, and from across Canada. On this, their 10th anniversary, the overall theme is the evolution of Indigenous cinema.

Here are some highlights: 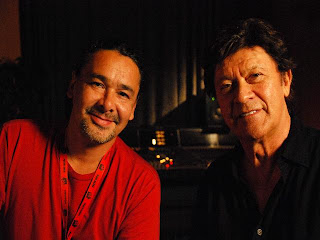 Image above of Reel Injun director Neil Diamond and Robbie Robertson
The Films - for an exhaustive list, along with screening locations and times, check out their website, but here are some interesting selections:

I'll be checking out some of the offerings myself, so stay tuned for reviews to come.
aboriginal film film film festival Indigenous cinema media arts multimedia toronto