Gathinja Yamokoski came to the United States seven years ago. A painter since childhood in her native Kenya, she knew the long tradition of African painting and its evolution into an active contemporary art scene. 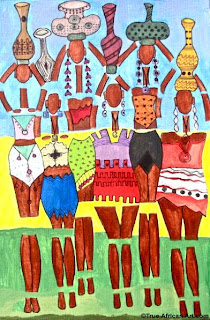 It was a world she found largely ignored in her new home, to her surprise. She began TrueAfricanArt.com as a business minded way of beginning to redress that balance.

Based in Westchester County, TrueAfricanArt.com isn't a gallery in the conventional sense, (although, if you are in the NYC area, they will gladly arrange a viewing). It's an online portal to the work of artists who live and work in Africa. In Kenya, artists network to find opportunities, (the off-line version,) and word soon spread that she was looking for pieces to sell. While sales initially began with the work of artists culled from art galleries, in March of 2009, her husband returned to Africa on a buying trip. They now sell the work of over 40 artists, and maintain a small staff that work on site on the continent.

The pieces you'll find range from traditional subject matter like figures in traditional dress or animals, painted with contemporary techniques, to less representational and more abstract treatments like Stephen Njenga's or Willie Wamuti's work. And, what begins as a marketing venture becomes an ongoing narrative. The website includes stories and videos of the artists where they work. Many are self taught, and would otherwise have difficulty via the usual route of gallery representation. 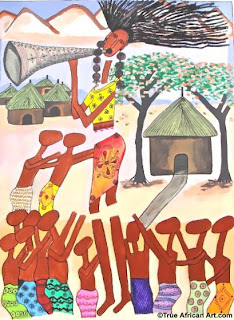 The high cost and scarcity of painting materials is a problem faced by many African artists. "I had to give most of the artists featured on True African Art.com a deposit so they could afford new materials in order to paint their best," Gathinja says. Sales are often not consistent enough to sustain the artists and their families year round. Gathinja says, "When there was political violence in my country following the 2007 elections, tourists stopped visiting for a while and every aspect of Kenya was affected, including the art economy." It's getting a broader access to the art marketplace on a sustained basis that is her goal.

The paintings are sold unframed to keep costs down and logistics more feasible. If you're in the Westchester area, there will be a show of their artists at the Katonah Library in February 2010, including abstract and realistic pantings, Tinga Tinga paintings from Tanzania, photo collages, and children's paintings.

Gathinja calls her own work "a raw talent", even though she's been painting since the age of nine. Trained first in fashion design as a more practical alternative, she nonetheless found herself going back to painting. 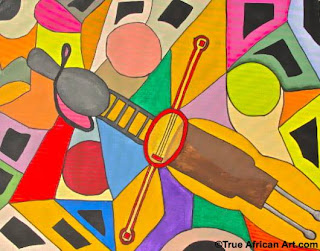 Her pieces are rhythmic in their composition, inspired by her African culture and background and coloured with a tropical palette. Many of her pieces feature the figures of women as subject matter. "I tend to do African women," she says, noting the women in her family who initially inspired her. "When I first came to America, I was surprised at the images of African women I saw (in the media) - they weren't the images of strong women that I knew, women who were happy to take care of their families, to work."

There's a large selection of work to check out if you're interested, or if you need a little African warmth to adorn your own living or working space.

The images are all by Gathinja - top "Working Together", middle "She Played Coro" and bottom "Lost In Music".
african art black art fine art for sale painting