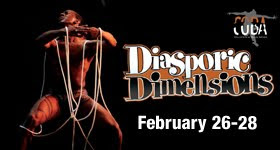 The evening ended on an energetic note, with Julia Morris' Hightal. It was the third piece Jamaican born Morris, also a member of the company, has choregraphed for COBA, and it's a meditation on her roots to traditional Nyabinghi rhythms. Nyabinghi is one of the oldest "mansions" of the Rastafarian religion, and their religious chants (or binghi) form the basis for what we know as reggae and ska today. The music was played live with four drums and two singers, and kept up a hypnotic pace for the ensemble of dancers, rising and ebbing in intensity. It was a rousing way to close off the night.
African dance caribbean dance collective of black artists contemporary dance harbourfront centre jeanguy saintus toronto dance scene