on March 18, 2010
Why Not Theatre Presents
I'm So Close It's Not Even Funny
(Part of Free Fall & in conjunction with the Harbourfront Centre)
March 23 - April 3 - see details below
The Theatre Centre 100-1087 Queen Street West (at Dovercourt) Toronto

Next week, I'm checking out I'm So Close It's Not Even Funny, what sounds like some very 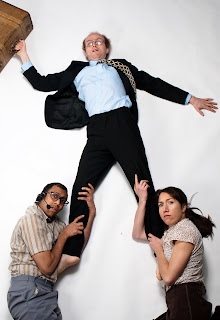 cool original theatre. It's presented by two year old company Why Not Theatre, currently in residence at Toronto's Theatre Centre, an international theatre company whose mandate is to create productions of both new and classic works that engage audiences in new ways.

Why Not Theatre's core consists of Ravi Jain (Canada), Katrina Bugaj (USA), Troels Hagen Findsen (Denmark), Katharine Yates (UK) and Gina Scherr (USA), who met as students at The Jacques Lecoq international theatre school in Paris, where studies tend to emphasize the physicality of performance. Their pieces combine various media with a physical energy that's been described as explosive, and they've gotten a lot of buzz since getting rave reviews for their performances at the 2008 Summerworks Festival, winning the Spotlight Award.

I'm So Close looks at real connectivity in our connected world. We have a zillion ways of staying in touch, but how close are we really? It follows the story of Steve, who wants to make the world a greener place - but we all know with what the road to hell is paved...

Looking forward to the show on the 23rd. The production tours to Vancouver in April directly after the Toronto run.