Love, Loss and What I Wore Official Opening

Love, Loss and What I Wore comes to Toronto after making a big splash on New York's stages, including an off-Broadway run and then on Broadway in fall of 2009, where stars like Tyne Daly, Rosie O'Donnell and Brooke Shields have been in rotating casts. It official opening is tonight (July 21) after being in previews since last Friday. While the cast is a Who's Who of experienced Canadian actors, the creative team, including director Karen Carpenter, come directly from the New York version.

In a nutshell, it's a series of monologues (with some dialogue I should add,) that tell the stories from the lives of women via clothes, and it began with Ilene Beckerman's 1995 book of the same name. She grew up in Manhattan in the 1940's and 50's, married twice, had six children (one of whom died in infancy) and ended up as V-P of an advertising agency. Ilene was approaching sixty years old when she, as a mother and grandmother, began to write and illustrate a series of memoirs/vignettes on her life based on the clothes that became attached to the memories. While she only intended the piece to serve as a keepsake for family and friends, one of those friends submitted it to a publisher, who offered her a contract.

As the story goes, Nora Ephron - she who penned Sleepless in Seattle and so many more - read the book and was enchanted with the idea, enlisting both sister Delia and about 100 of their friends to add their own reminisces to Ilene's gentle storyline. While there are plenty of laughs - like the line that goes Sometimes I buy something that isn't black…and I am so sorry! along with poignant moments, like the death of Ilene's mother, and the story of a breast cancer survivor. In the premiere cast, Ilene's story is handled by stage veteran and recent Dora winner Louise Pitre, with the other four actors handling a variety of voices.

Staging is simple - just the five ladies seated on stage, more or less - but you don't need much with a cast that has a collective resumé like this. I think most women will immediately connect with the stories, from our mothers' voices questioning our taste (and the horrible outfits they made us wear!) to remembering a prom dress or what you wore on your first date with the love of your life. And while it's certainly female friendly, any man who's 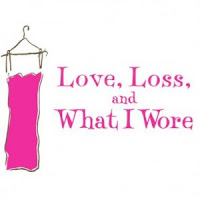 had a relationship with a woman (including his own mother) can relate to it too.

Portions of the proceeds go to Dress for Success, a registered charity that gives low income women professional clothes and career development tools.

The premiere cast continues until August 10, when a new cast takes over, including Cynthia Dale, Wendy Crewson, Lauren Collins, Margot Kidder and one actor yet to be announced.