You can check them out in action here.

The renowned professional dance ensemble under the name of Pavlo Virsky is famous for its bright colours, the unity of content and form, and the vivid embodiment of its stage concept. This artistic group embraces the beauty of its native Ukraine, the wisdom of its people, and the folk tradition of humour and optimism. Each and every performance is romantic, elevated, and passionate. The ensemble’s diverse concert programs have been warmly received by audiences in over sixty countries including Mexico, the United States, Cuba, Venezuela, Vietnam, India, China, Brazil, and Korea.

Virsky started in 1937 by two well known Ukrainian ballet masters, Pavlo Virsky and Mykola Bolotov. From 1955 to 1975 the group was led by Virsky whose exciting choreography thrilled dance audiences for years. It was under the guidance of Virsky that the company matured into the professional dance ensemble that the world enjoys today. 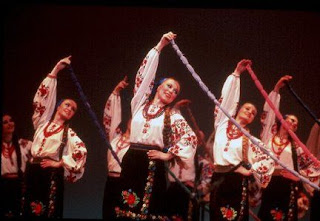 In 1980, Myroslav Vantukh, Virsky’s disciple and an expert in folk traditions and ethnography took over from Virsky and continued in the same spirit of creative genius, preservation and development of folk choreographic art. Virsky continues to grow under the direction of Vantukh as he takes the dancers to new heights of accomplishment through his ever expanding repertoire of new dances and continues to entertain and educate the world about the talents of the Ukraine.

The Canadian tour presented by Boen Arts opens up in Vancouver on October 7, winding its way east across the prairies to Hamilton by Halloween and then Montreal and finally Ottawa on November 2 (with many stops between. Check their website for details.
boen arts edmonton pavlo virsky ukrainian dance virsky canadian tour dates